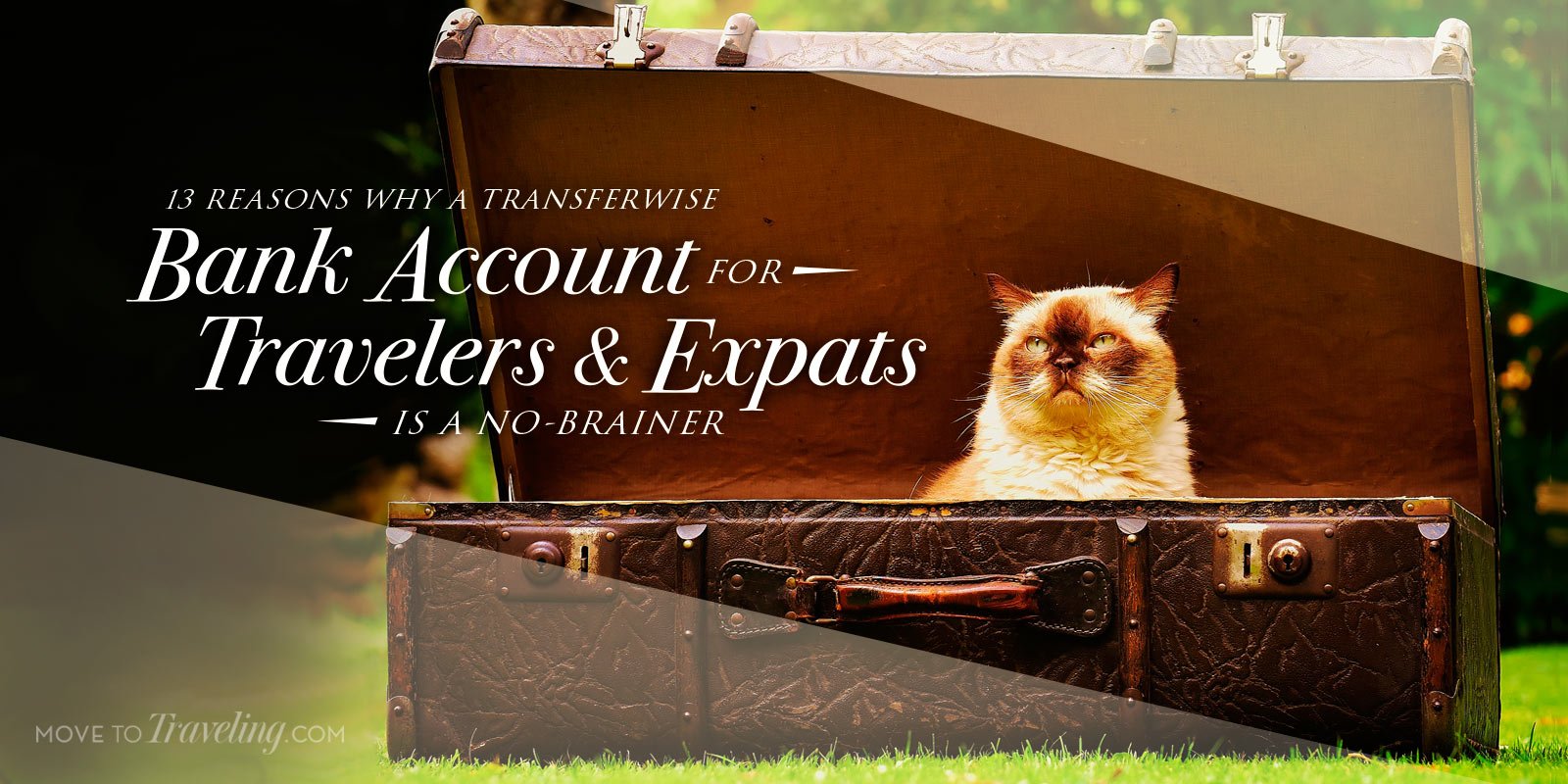 This post includes affiliate links that we may receive a commission from, at no extra cost to you.

One such bank is TransferWise, and boy are they perfect for traveling and moving abroad. As an authorized Electronic Money Institution, you can use them to send and receive money, and with their Borderless Account you can keep and spend money in multiple currencies. From our own years of experience as customers, here are our top thirteen reasons why it’s a no-brainer to have an account with them.

Setting up an account with TransferWise is absolutely free. There’s also no maintenance fees and no minimum balances that have to be kept. Their debit card is also free (more details about that coming up). 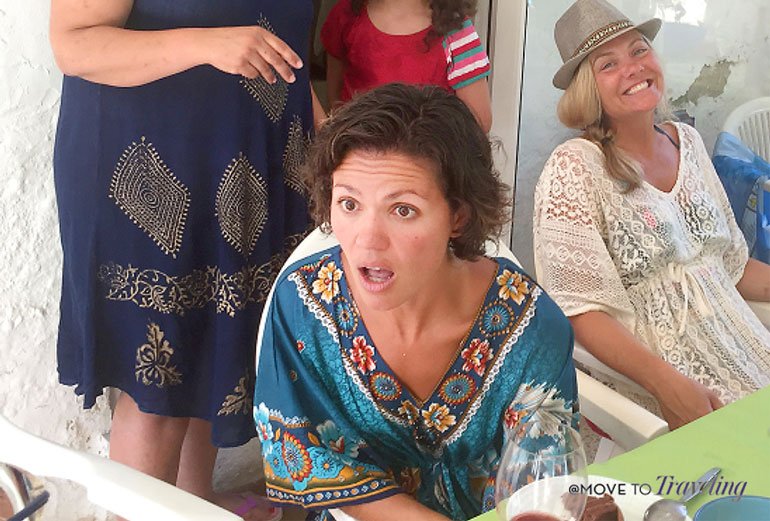 Where there are fees, TransferWise is actually 8x cheaper than banks. They charge a low fee for conversions, which is calculated based on the amount, and they make sure to give you the real exchange rate.

See pricing for sending a transfer with TransferWise.

Setting up a TransferWise account can be done from anywhere online. The process is efficient and convenient, without having to go into any office or even use a VPN (although a VPN is still great to have for living abroad – we love Express VPN). You just upload a picture of your identification and it takes some business days to approve.

What is also really great is that when you go to make a transfer, the fee and rates are all shown at the beginning. You can see how it’s calculated, options for how to send the money, and even the estimated time it will take to make the transfer. Then, you can adjust and proceed from there. 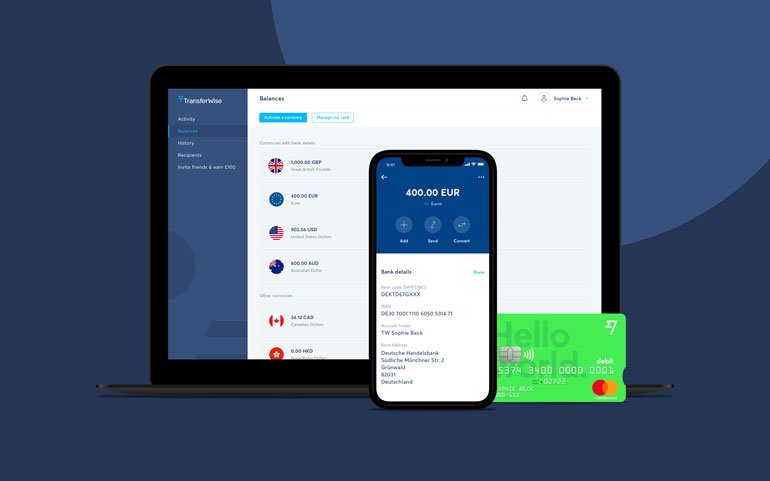 You can use TransferWise in two ways – to make transfers and to hold/spend money. If your need is simply to send and receive money, then in your TransferWise account you can easily do that with an already existing debit card, credit card, or bank account you want to use for sending and receiving money.

You’ll also see how long each of the different methods take and what the conversion fee is, so you can choose the method best for you.

You can send money to 50+ countries, and it’s just a one-time low fee and the real exchange rate (if any conversion is made). We’ve also found TransferWise to offer some of the fastest options for sending money.

More on receiving money, and holding/spending money, further below. 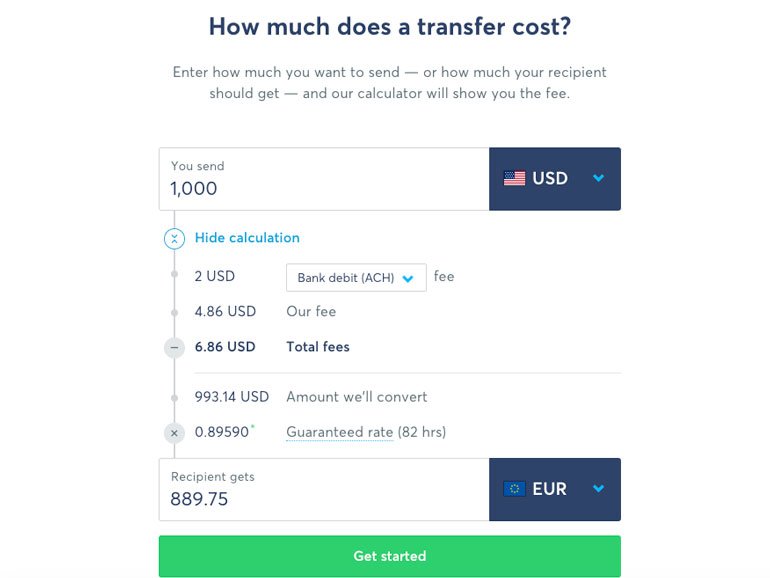 Reason #5: The Magic of Multiple Currencies

So beyond conducting money transfers, you can also keep money within your TransferWise Borderless Account. You simply activate this by adding ‘Balances’ in different currencies. And this doesn’t require having to deposit any money.

TIP: It says at first that you have to deposit money to add a currency, but this is not the case. Just start the process and it will add the currency you select.

You can hold and convert money in the Borderless Account in up to 40+ currencies. Yeah, that’s a lot! Reality is, many of us only need two to three, but hey, it’s great knowing the options are there.

Moving already deposited money between the currencies you have set up in your Borderless account, is instantly available. And of course, in addition to whatever currencies you choose to keep balances in, you can still send, receive and spend money in any other currency.

That’s right. With the Borderless account is the Borderless Debit Card. It’s free (can never mention free stuff too often), and can be used anywhere in the world that accepts MasterCard.

The only downside is that they’re only currently available for those living in the Eurozone. But, that is set to change at some point. You can even request to be notified of when they’re available for your area of the world (the US is set to be next).

Using the card to pay in currencies that have a sufficient balance in your account is free, with no conversion fees. And ATM withdrawal fees are free (up to £200 per 30 days). 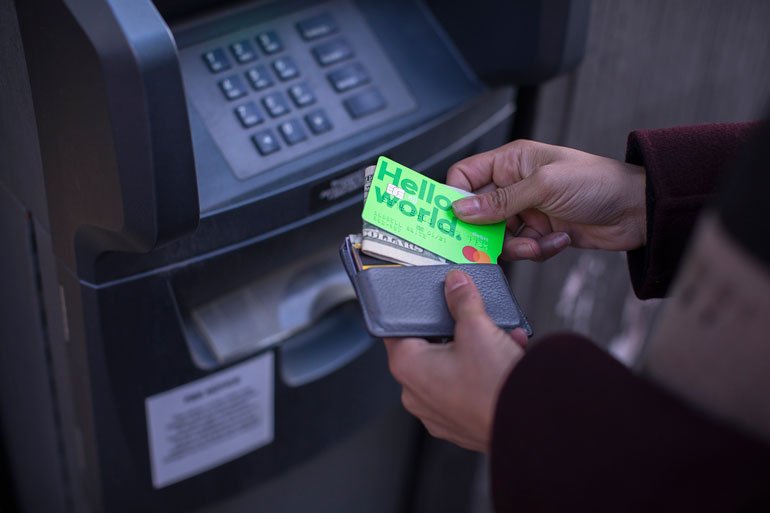 Having the Borderless account instantly provides you with your own bank details for the currency of your choice. You can be sent money from over 30 countries with zero fees.

Providing these bank details to friends and family, and clients, means they can pay you directly at no cost. You can currently get paid this way from any country in the Eurozone, the UK, US, New Zealand and Australia.

Reason #8: They Have an App for That

The TransferWise app is great! It can be used for extra security when making payments with the debit card and for two-step authorization for logging into your account on a desktop.

The usability is easy, allowing you to do transfers and move money between your Borderless account balances, and it’s secure. 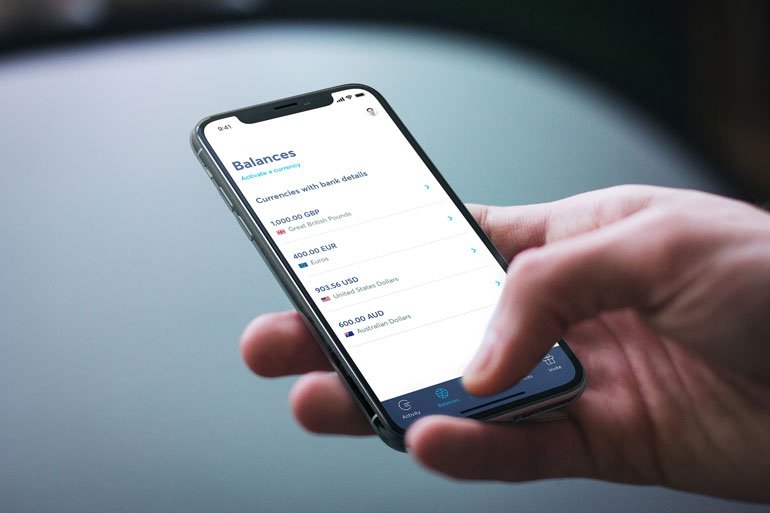 You can have a business account with TransferWise. This account can conveniently be accessed from within your personal account and it’s also free to set up, and with no minimum requirements or maintenance fees. And they’re 14x cheaper than PayPal (that’s no surprise).

If your company is registered in the Eurozone, you can even get the Borderless Debit Card as well, which is also free. This will be available next for the US and you can request to be notified of when. The business accounts also come with other great business accounting tools, like integration with Xero Integration, batch payments, open API, and monthly statements.

Another plus is that you can refer others, whoever you like, and get rewarded. Easy-to-share links and methods are provided within your account.

Each person you refer gets a free international transfer of up to $500. Then once three of your referrals have signed up and sent over $300 (each), you’ll receive $75 in your account. Pretty nice, huh!

The customer support that TransferWise provides has been fantastic. It’s easy and convenient to contact them. You can send a secure message from within your own account and they’ll respond to you directly via email. We especially prefer this over having to get on the phone.

And contacting their support by phone or via chat are also options. They usually respond within a couple of business days and are very helpful. For emergencies with the debit card, you can call the number on the card. 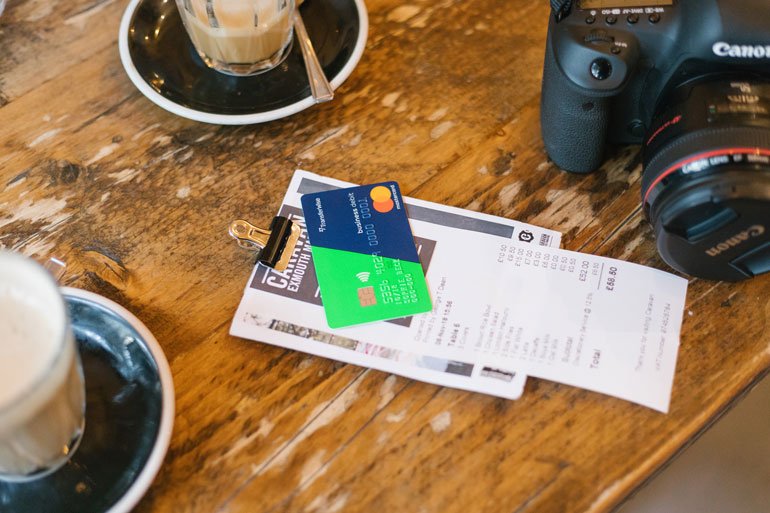 TransferWise is “… independently regulated by the Financial Conduct Authority (FCA) in the UK”.

So they’ve got their regulations covered. They also use 3D Secure, which gives the options of approving online debit card purchases by either receiving a SMS to your mobile, via the app on your mobile, or with a phone call to your mobile.

Read more about how they keep your money safe.

Reason #13: Better than the Competition

TransferWise is 14x cheaper than PayPal (big surprise). We’re not fans of PayPal anyways and don’t use them. There’s far better options out there nowadays.

Let’s also remember that there’s no hidden fees and no minimum balances to keep.

We’ve also found TransferWise to be much quicker with transfer times, which can be within seconds or just a couple of hours (depending on which method of payment you use).

Amalia signed up for a Denizen account last year (a different global bank concept), but she has so far not been impressed. The majority of transactions are conducted via the mobile app, which has been disappointing with its technical issues and bugs. There is not an easy flow of conducting transactions that shows fees up front, and if you did not sign up during their beta period, accounts cost or will cost soon. Overall, it seems it has a long way to go until it’s truly worth relying on and using regularly.

Amalia also has a personal account with Capital One 360, which has no fees and even no ATM fees when traveling. But when we went to create an account for Eric, we weren’t able to because we were already living in Spain. But they had first told us that we could – there was conflicting information and it used up our time and was frustrating. Turns out it’s not as traveler and expat friendly as we thought.

Our Experience with TransferWise

We’ve been using TransferWise for over three years now, and started back when they were relatively new. At that time, they didn’t have Borderless Accounts or the debit cards, so it’s been especially great to see them expand in their offerings.

We regularly transfer USD from our US bank accounts to our Spanish bank account, and to send money to others, like our families. And with the Borderless Accounts, which we each have for personal and business, we receive payments from clients and keep and spend money in USD and EUR currencies.

So far out of the two of us, Amalia has the borderless debit card, which has worked great for spending money in Spain, when traveling around Europe, in the US, and for online purchases. Eric is getting his debit card soon. 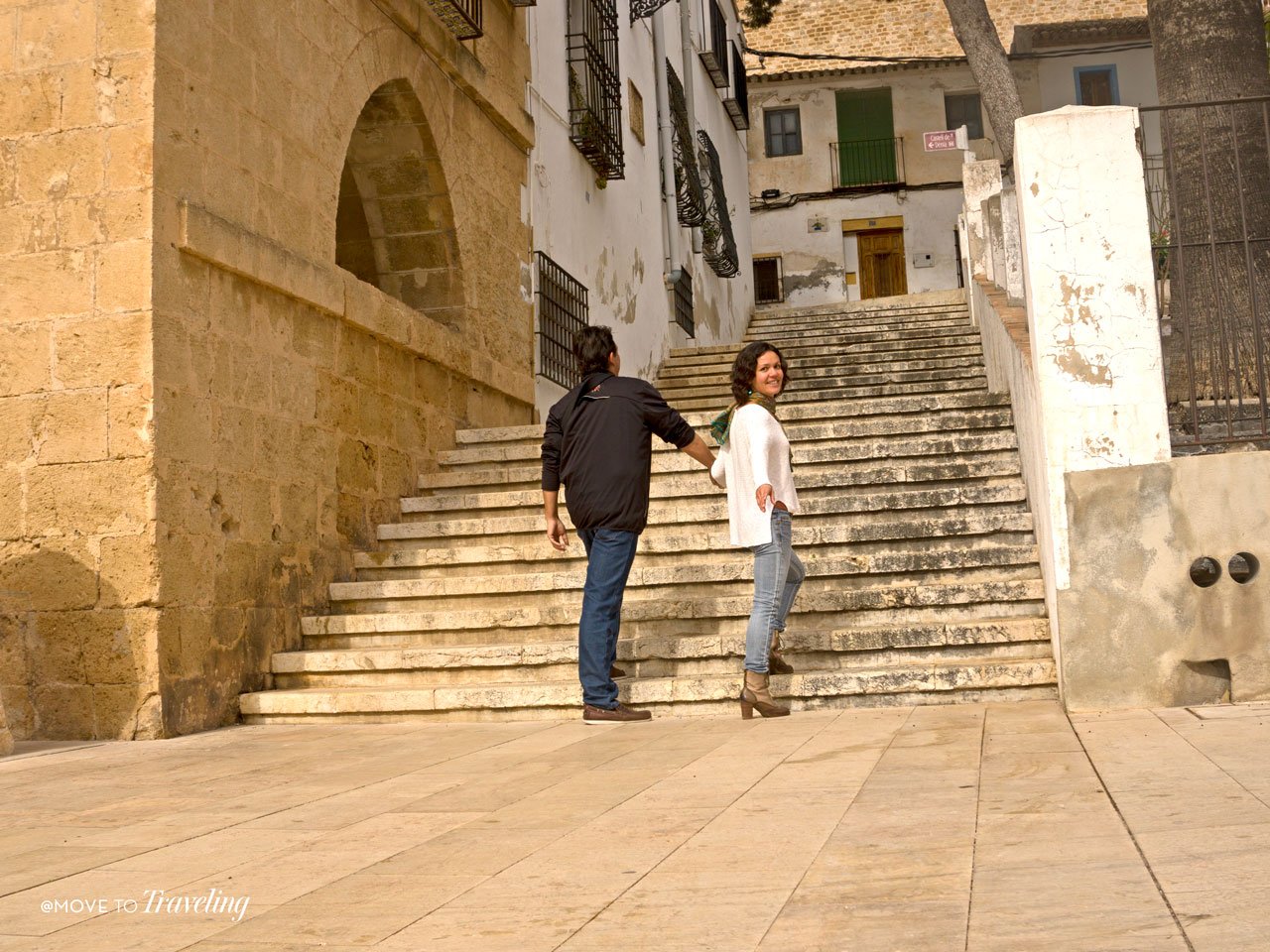 With all these great reasons, it’s easy to see why a TransferWise account has become a no-brainer to have as a traveler and expat. It’s ideal for being on the move and living abroad. They’re a company and service that knows what it means to be global and is meeting the needs that come with that.

If TransferWise can enrich your lifestyle as a traveler and expat, sign up today! And remember, your first international transfer will be free (for up to $500).

What’s your experience as a traveler or expat been with banking? Do you have any other resources you’d like to recommend? Any questions about TransferWise or other tools? Let us know in the comments below and we’ll love getting back to you. 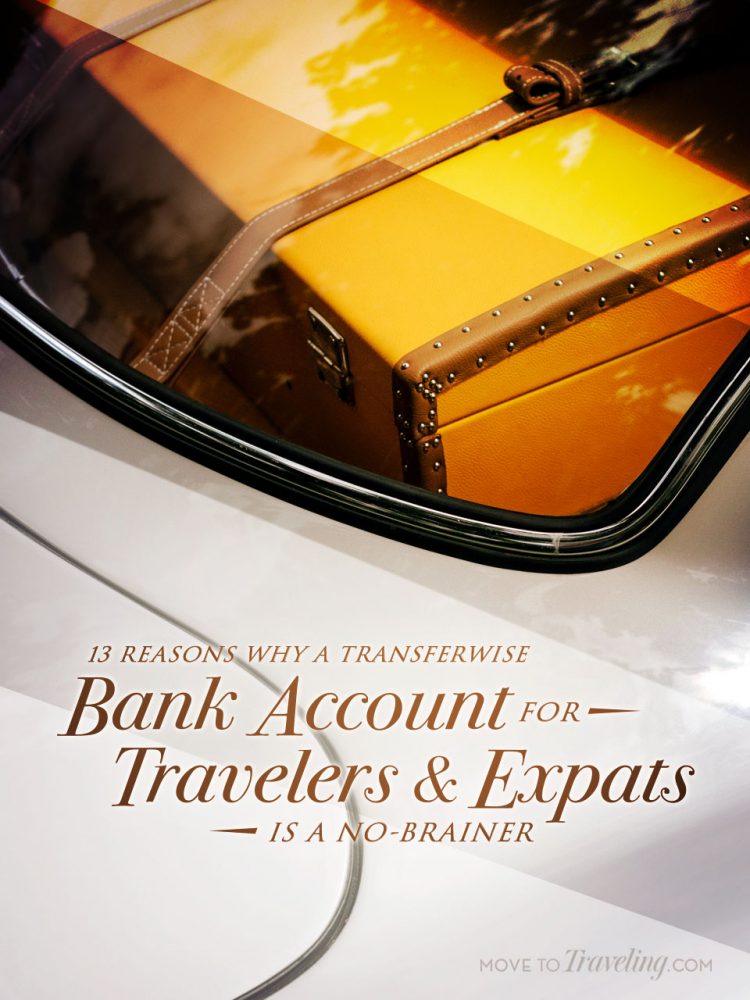 This article is not sponsored or endorsed by TransferWise. We simply wanted to share it as a resource from our own personal experience with it. We are also a part of their affiliate program and the links in this article are affiliate links from which we receive a commission, at no cost to you.