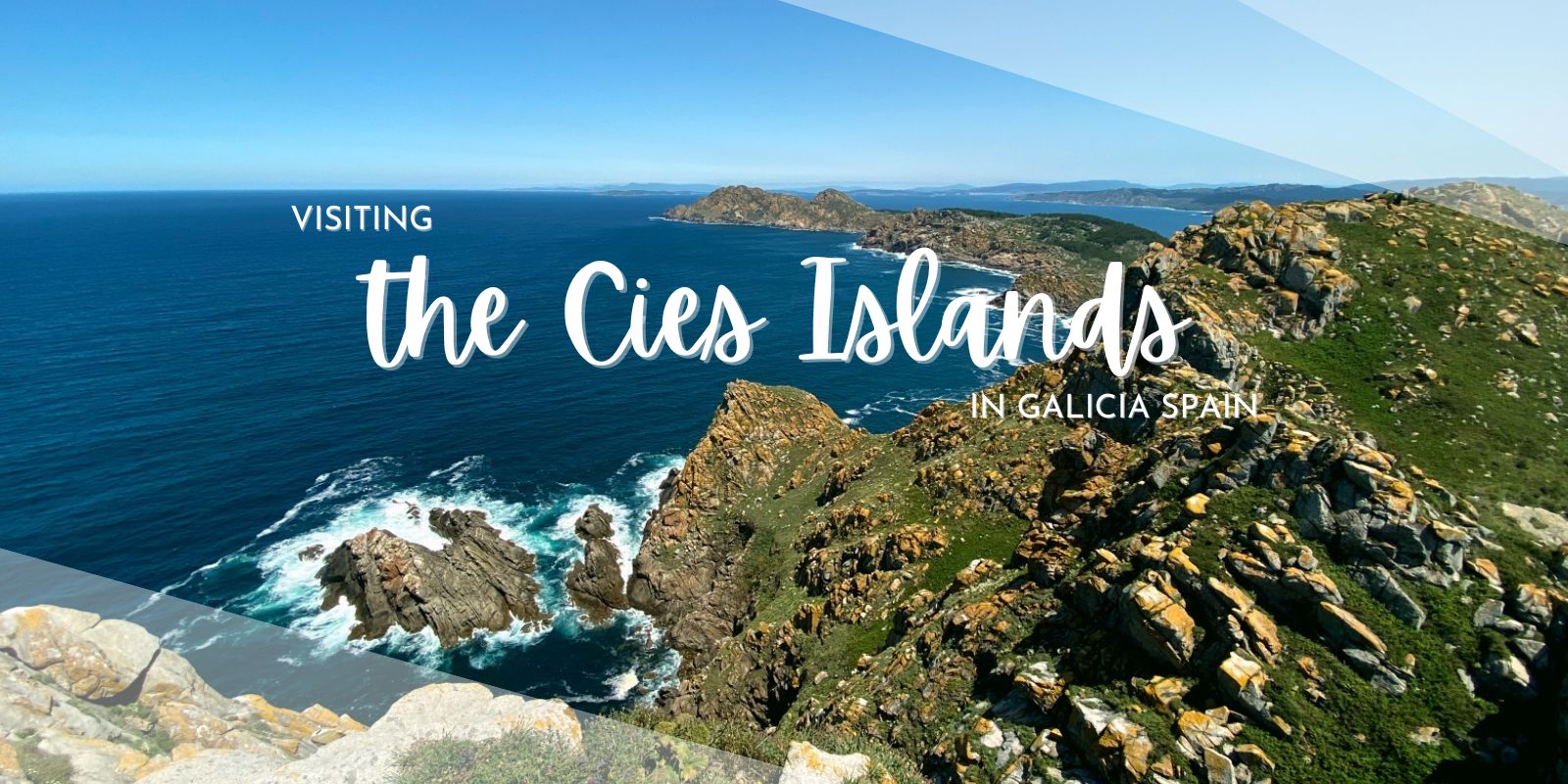 If you love nature, visiting the Cies Islands is a memorable experience to have when on the west coast of Galicia, Spain. As part of a protected natural park, it has gorgeous beaches, breathtaking views, lighthouses, and more.

Having lived in Spain several years now, I had never heard of it, giving it that off-the-beaten-path feel. Yet it is one of the most visited tourist destinations in Galicia and one of its beaches has been awarded the title “Best Beach in the World”! Better yet, I got to visit with two locals who knew the islands before they became protected.

If you’re curious about this destination in Galicia, here’s how to enjoy visiting the Cies Islands for yourself.

What Are the Cies Islands 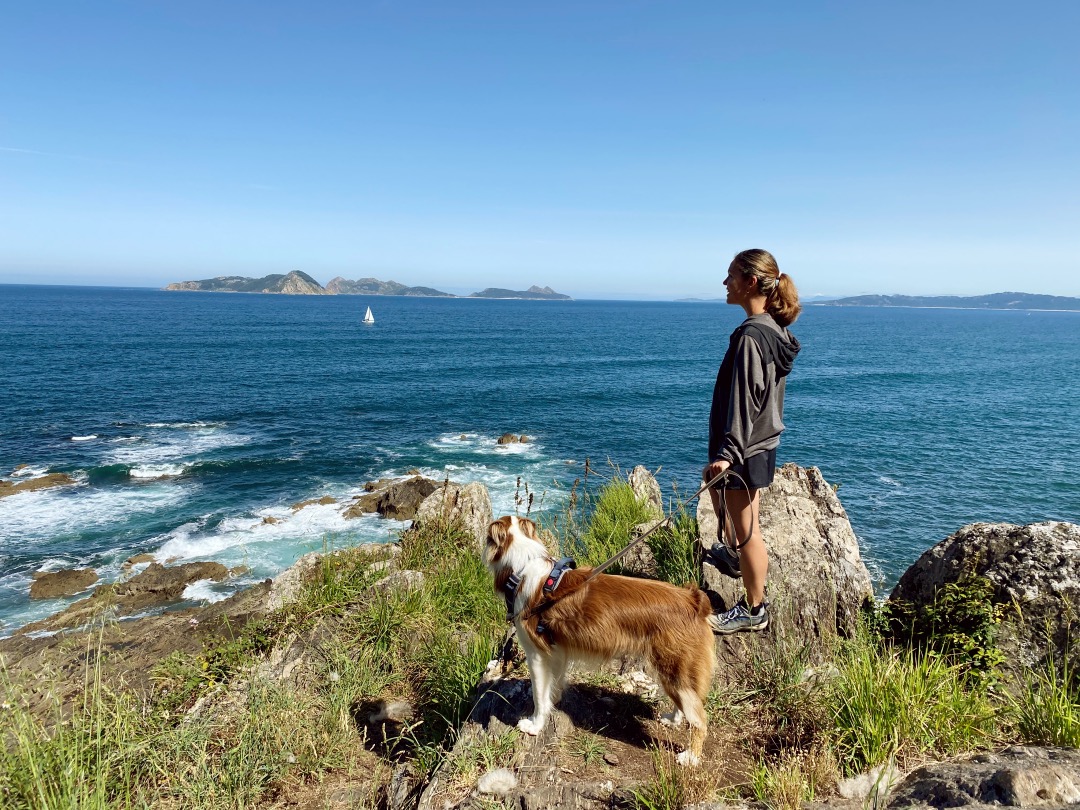 Above Image – A great view of the Cies Islands from Monteferro on the mainland.

The Cies Islands are an archipelago that is part of the Atlantic Islands of Galicia National Park. Made up of three islands, the southern one is San Martiño, then in the middle is do Faro, and the northern one is Monteagudo.

Do Faro and Monteagudo are linked by the Rodas beach, which in 2007 was named by the Guardian as “The Best Beach in the World”. And I could see why – the gorgeous soft sand and pristine, turquoise water create a heart throbbing paradise.

More recently in 2022, the New York Times featured the Cies Islands in its list of “52 Places for a Changed World”, thanks to its efforts to “protect its environment and guard against overtourism”.

Pine trees and other verdant vegetation flourish along the mountainous outcroppings. On the western side are dramatic vistas from steep, rocky cliffs, while the eastern side is home to enticing beaches and coves.

Another special feature of the Cies Islands is that it is a Special Protection Area for birds, known as the ZEPA status (Zona de Especial Protección para las Aves). 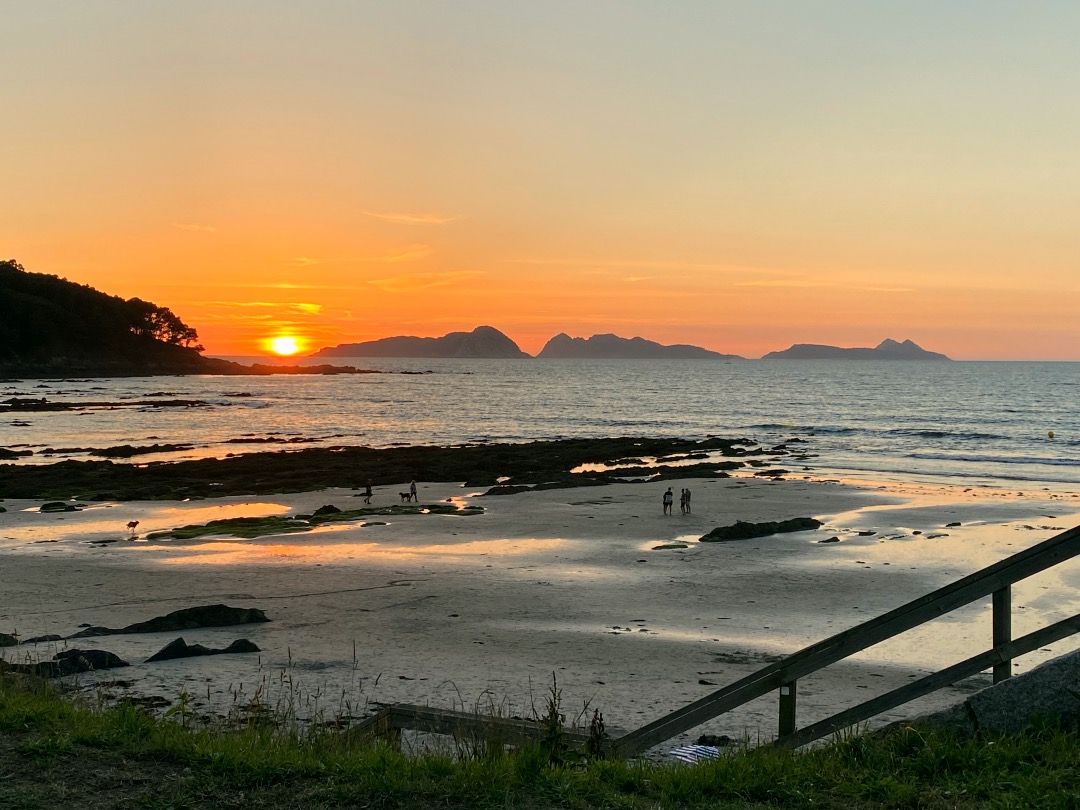 Above Image – Sunset on the Cies Islands from the Playa Pato in Nigrán.

Located in the Vigo Estuary (Ria de Vigo), the Cies Islands are a beautiful addition to the already spectacular ocean views from the province of Pontevedra on the western coast of Galicia. They can be seen from the seaside towns of Baiona, Nigrán, Vigo, and several others.

Having seen it from several places, I think that the best views are from the Playa de Patos in the town of Nigrán, and right next door from the small mountain of Monteferro. It is especially wonderful to see it from the beach at sunset.

What to Do on the Cies Islands 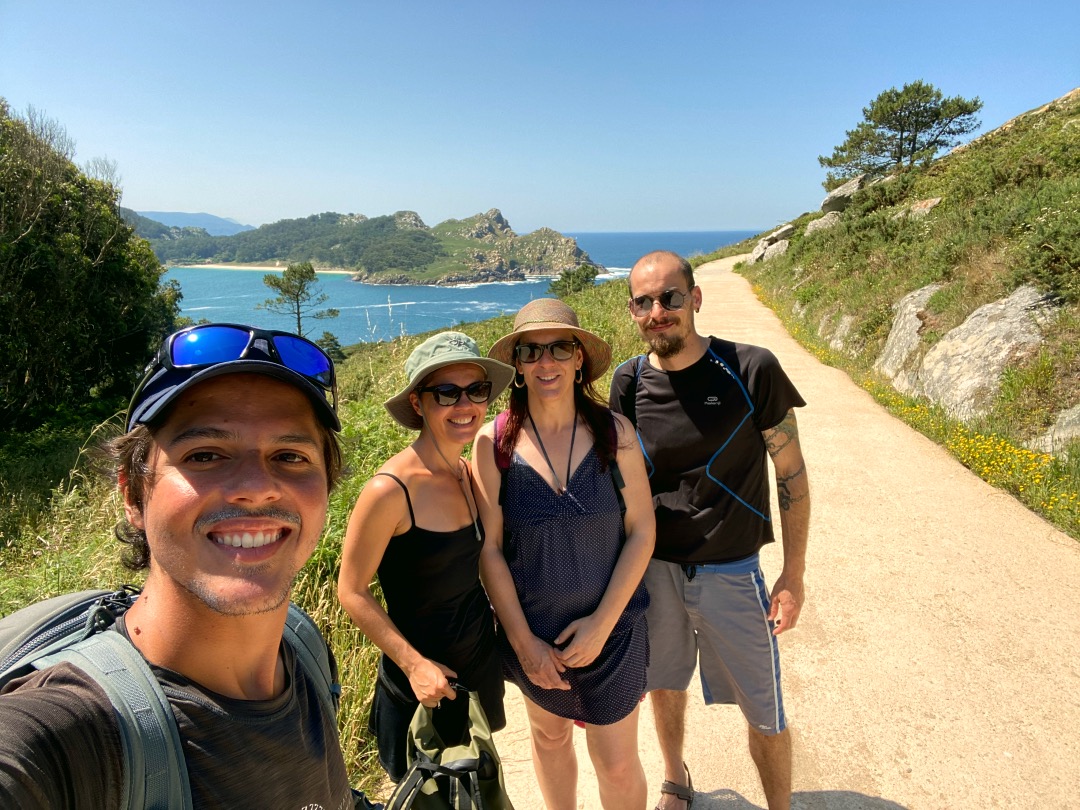 Hiking and relaxing on the beach are the two main things to do on the Cies Islands. Throughout the two islands of do Faro and Monteagudo are very nice wide walking trails that are paved.

On the island of Monteagudo is the largest and most popular beach, the beach Rodas. It also connects with the island do Faro. North of there is the beach Figueiras which is smaller. A little further from there is the small lighthouse Faro de Peito which faces east.

With my brother and his friends, we walked up to the highest point which is on the island do Faro and which has the Faro de Cies or Cies Lighthouse. The views are spectacular from this summit! On the way there, you can also visit the smaller lighthouse Faro de Porta. 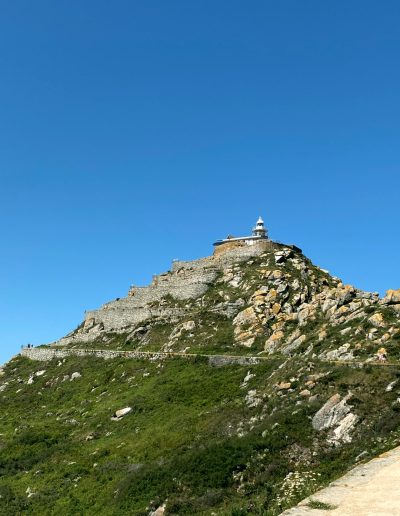 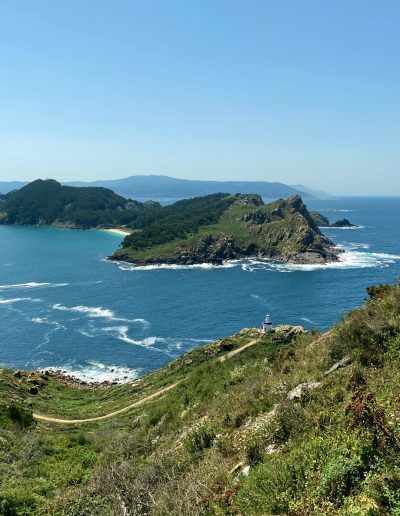 On the eastern side of the island of do Faro, and just off the trail to the main lighthouse, is the smaller beach of Nosa Señora. I fell in love with this beach and it’s where we relaxed and took a brisk swim after hiking down from the lighthouse. I liked it even better than Rodas beach.

Camping on the Cies Islands is possible. It is limited to 600 campers maximum and only allowed in one designated area where tents are already provided or space for your own tent that you can bring. This also has to be booked in advance on the website.

Aside from hiking, swimming, picnicking and camping, diving can also be a great activity in these splendid waters, but you do have to get permission.

How to Visit the Cies Islands 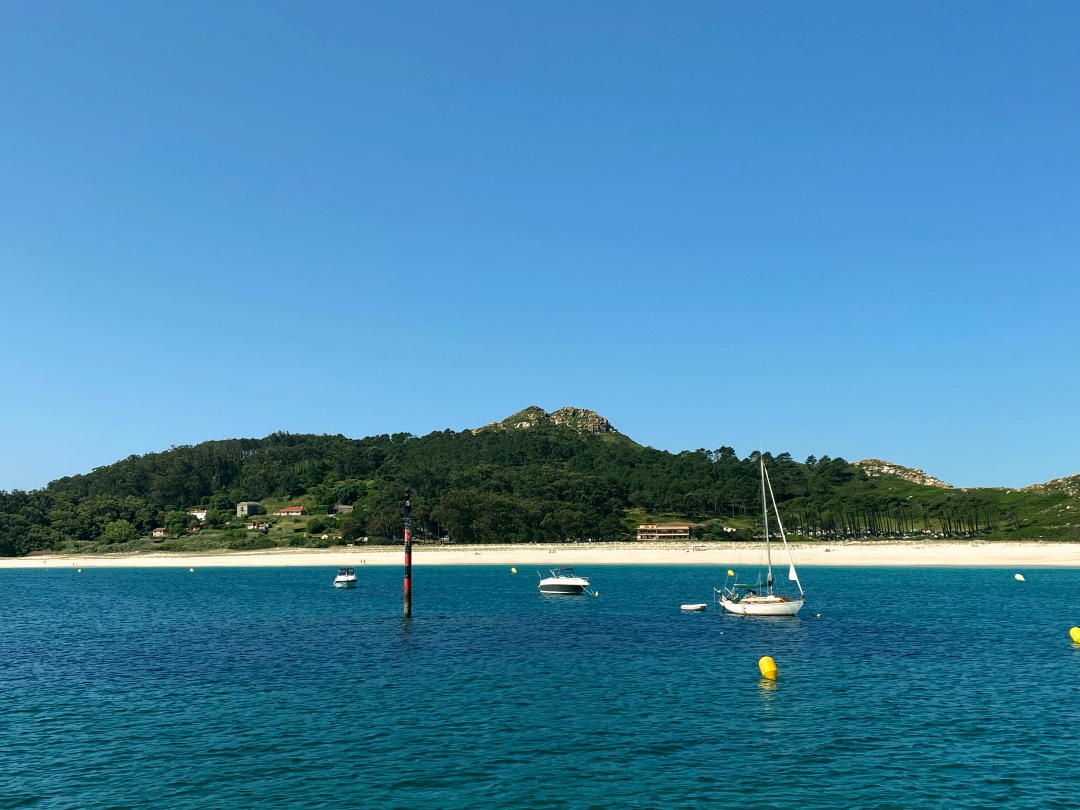 Above Image – The Rodas beach where the ferries arrive and depart.

As part of the efforts to protect the Cies Islands, the number of visitors is regulated. You have to book ferry tickets or anchor permission in advance to visit. It is limited to 2200 visitors a day. Ferries run from Vigo, Cangas, Baiona, and sometimes Sanxenxo and Portonovo.

Keep in mind that even in the summer there can be cool temperatures so come prepared with layers, especially for the ferry ride. The Atlantic water is frigid so the best time to visit the Cies Islands is during the summer months. I was there in early June and even though there was a heat wave, I could not bring myself to get into the water a second time, it was that cold. 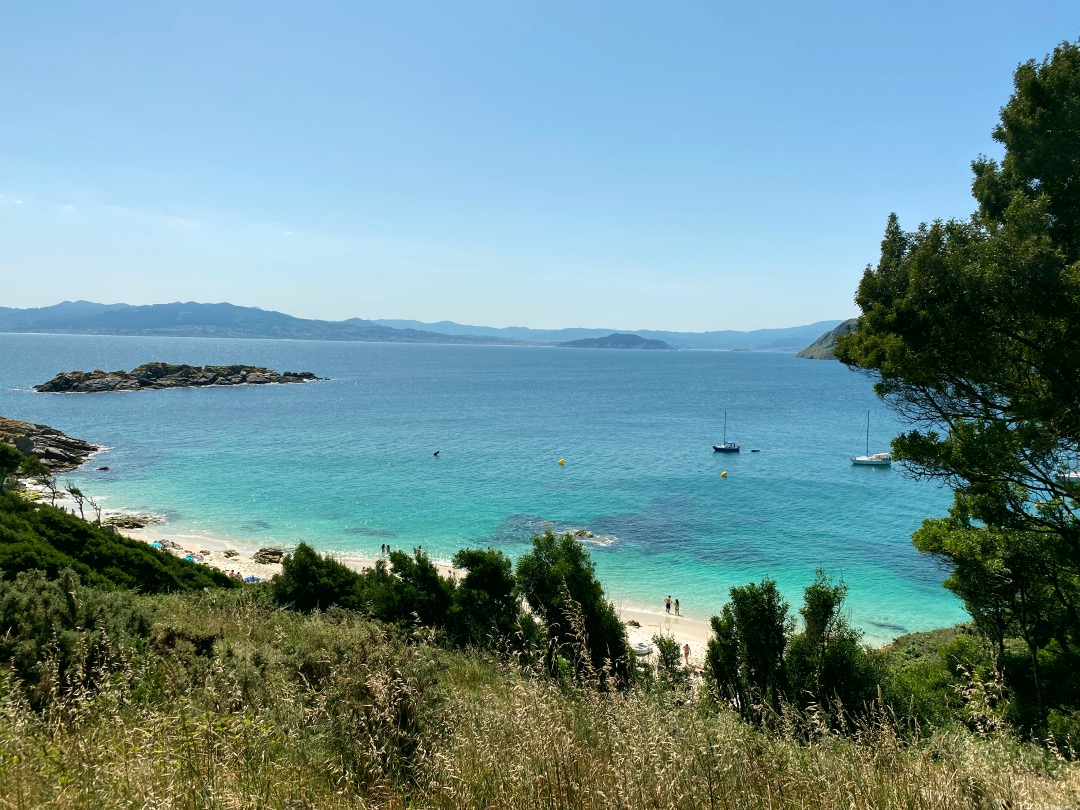 Above Image – The Playa Nosa Señora, my favorite. 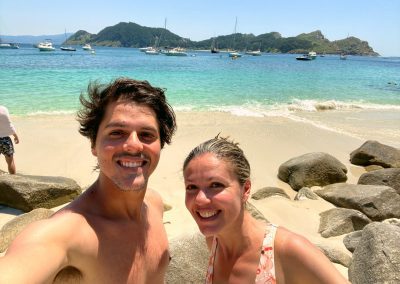 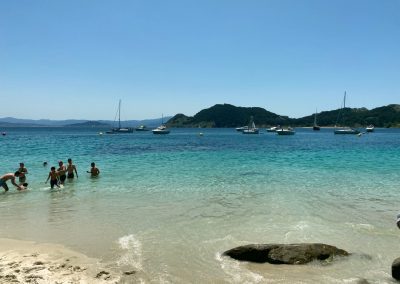 We could see that private boats can also visit the Cies Islands but they have to get an anchoring permit, as well as permission to dive in this area.

Other regulations for protecting the islands include, but are not limited to, not taking any vegetation or natural objects from the islands and no dogs/pets, unless it is a guide dog.

There are no trash cans on the islands, except for at the main cafe where the ferries arrive and depart, at the only other two bars/restaurants, and at the camping grounds. Otherwise, everyone is told they need to be prepared to pack out their trash and cigarettes with them and not leave any litter behind. 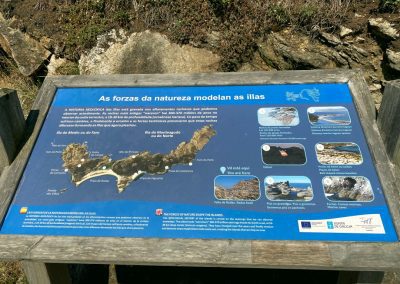 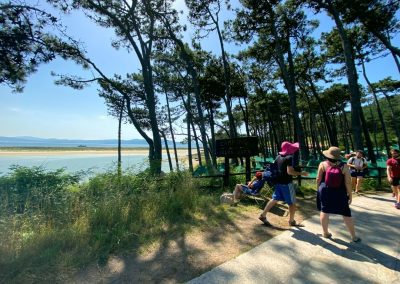 According to what local friends told us, the southern island of San Martiño does not allow for visitors by ferry. But from where we enjoyed the beach of Nosa Señora we could look right across at a gorgeous little stretch of sandy beach there and could see sailboats anchored just out from shore. So it seems possible to at least enjoy the beach on San Martiño by private boat with authorization.

An important thing to also keep in mind is to beware of the seagulls. They are aggressive here! As soon as any food comes out, they will swoop in and try to take it, and they don’t take no for an answer a lot of the time. So do not leave food unattended. And whatever you do, do NOT encourage and feed them. That goes for your kiddos too.

Other Destinations from the Cies Islands 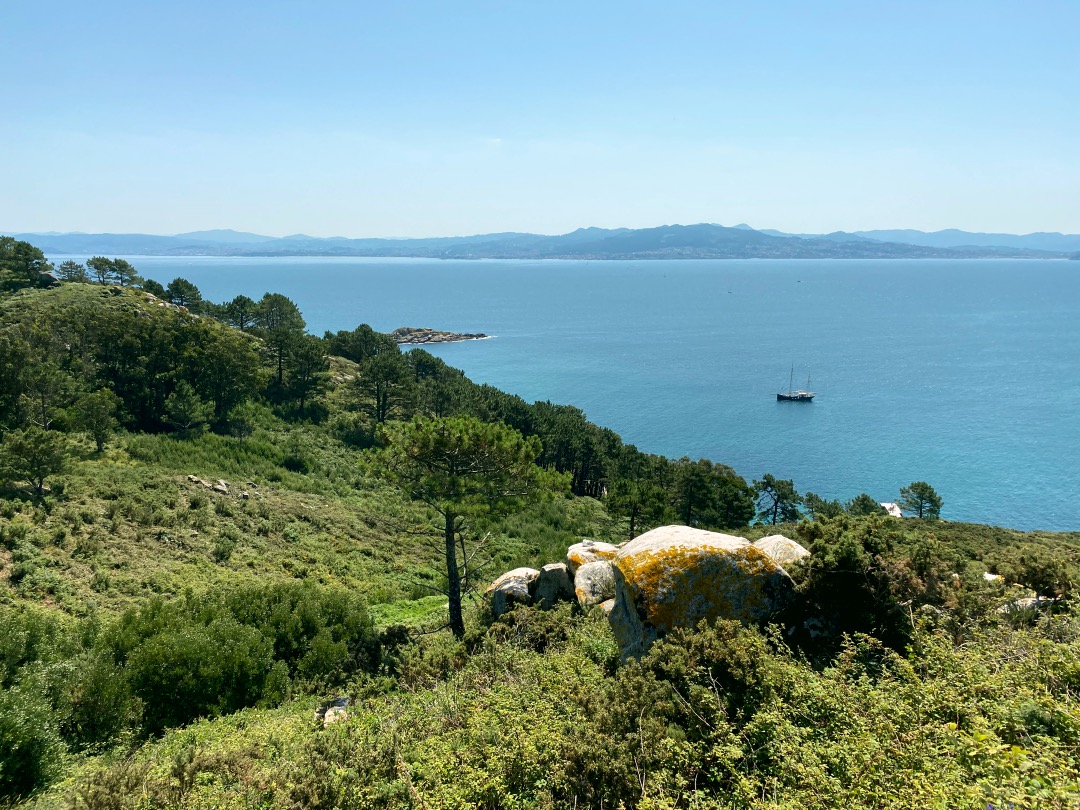 This area of the western coast of Galicia is beautiful to visit. Part of the famed Camino de Santiago also traverses along this coast line. In addition to visiting the Cies Islands, the coastline has various great hiking trails, lighthouses, castles, and charming seaside towns to enjoy.

Visiting the Vigo Area of Galicia 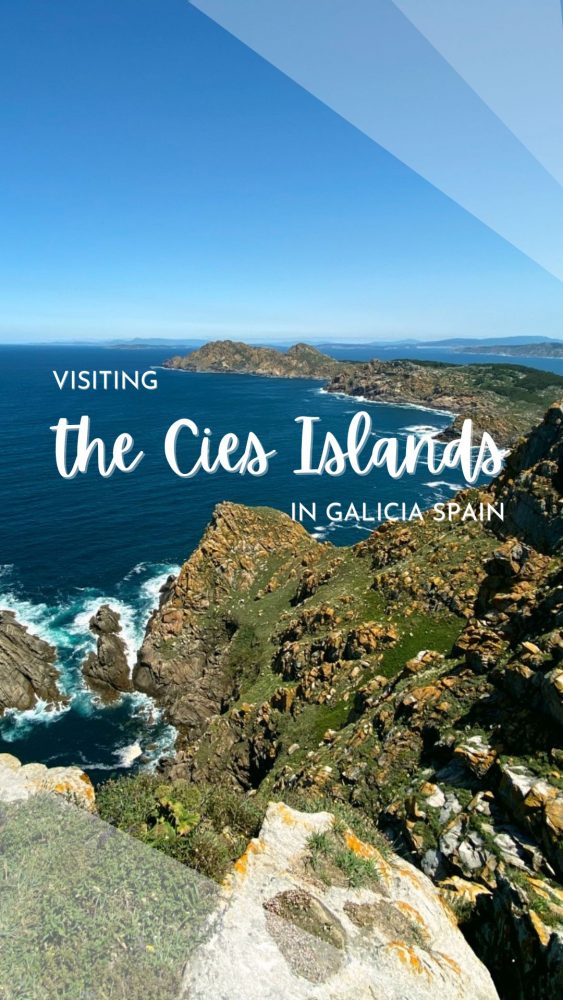 I love living in Denia, Spain and traveling worldwide. My idea of a great time is ‘eating and drinking’ my way around a new place and meeting the people. As a certified Travel Consultant, I specialize in custom travel planning for trips throughout Europe, as well as scouting trips for moving to the Costa Blanca area of Spain. Here on MoveToTraveling.com you can enjoy our Europe travel resources to experience Europe and live in Spain.