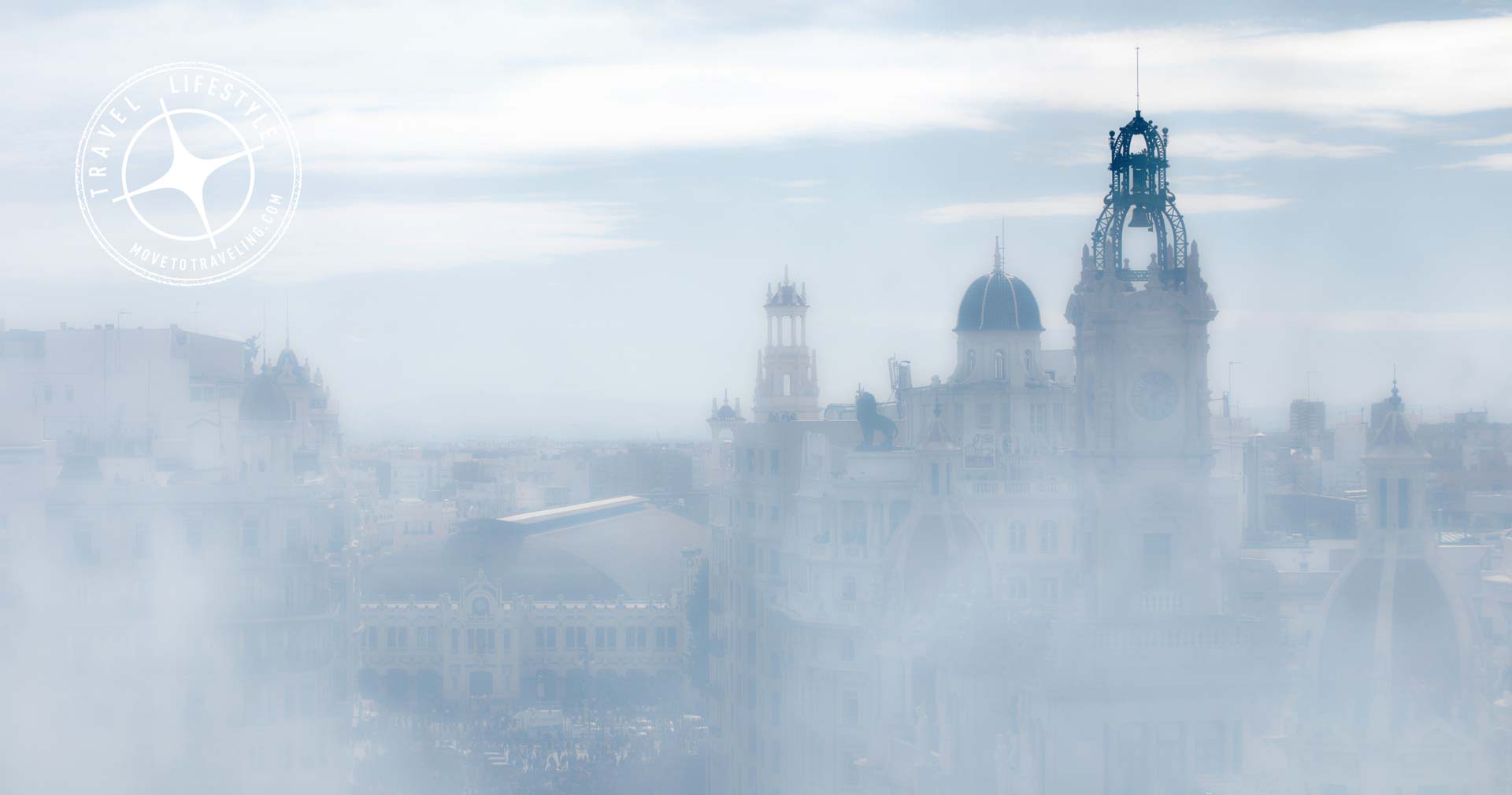 ← Go Beyond the Tourist-Norm of Valencia's Historical Sites at this Less-Frequented Ancient Monastery The Fallas Festival 2018 in Denia, Spain - Story + Video →

Explaining the Fallas tradition of the Mascleta to someone who’s never experienced it, doesn’t do it justice. Telling someone about the explosive fireworks, they think of Fourth of July. Or recounting the deafening blasts that vibrate through you like war cannons, they think back to their last rock concert (a poor comparison). Finally when we vividly tell of its location in the very heart of Spain’s enchanting Mediterranean city of Valencia, surrounded closely by vintage buildings and thousands of people…well, then people start to realize they can’t comprehend the Mascleta until they’ve been there themselves.

Want to see the Mascletas as though you were there? Read our post later, and skip ahead to watch the video.

Exclusive View of the Mascelta of Fallas 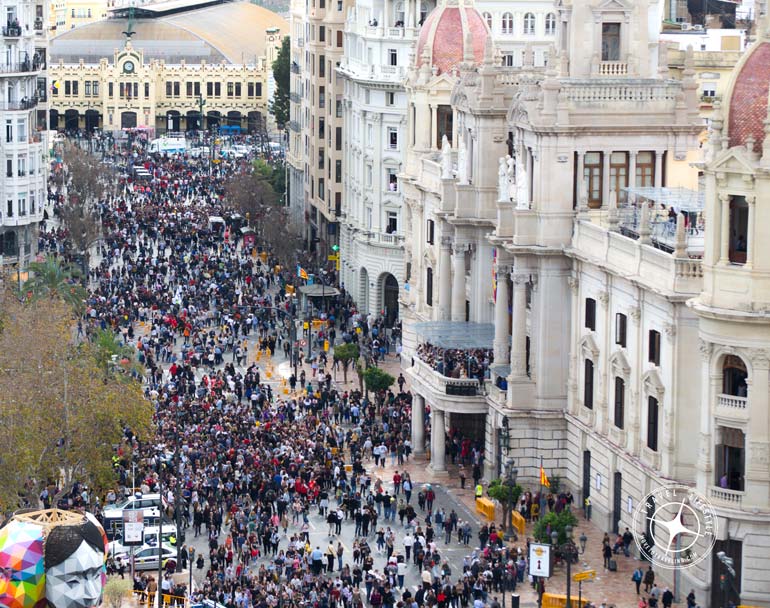 This past week I got to watch this explosive Fallas tradition from a hotel rooftop, fantastically situated right in Valencia’s Plaza de Ayuntamiento (where the City Hall is located) and overlooking the very spot where the Mascleta takes place. I thought of you and got some great video footage that Eric has created a short video of, so you can also get a great view of what the Mascleta is all about.

The Origin of Fallas and the Mascleta 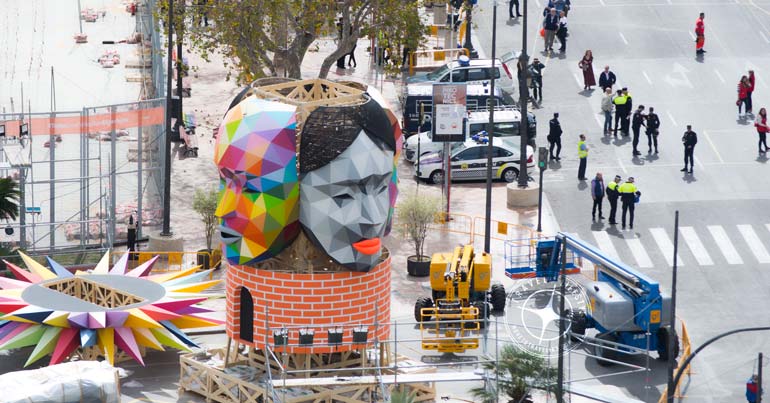 The Fallas are the festival in Valencia that takes place each year to celebrate the spring equinox and represents getting rid of the old and welcoming in the new. Another strong meaning behind it is to remember the impermanence of life.

It is unknown as to exactly when the festival began, but some say it goes all the way back to the Middle Ages, when the workers had wood planks they would hang up and set their candle on (called parots), giving them light to work in the darker winter months. But once spring came, they were no longer needed and were gathered up and burned.

Along with the parots children would run from house to house asking for old rugs to dress up the parots with and over time, they would decorate them to look like small figures. These came to be also be called Fallas, the word for the figurines and the festival itself. For decades now, the Fallas structures have become even larger and they are all burned on the very last night of the entire festival, which is called la cremà. 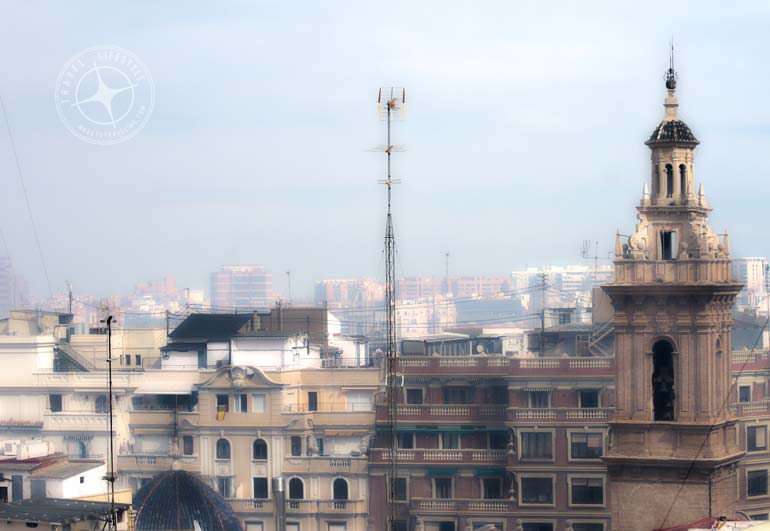 Above Image – Look hazy? It’s the smoke from the gunpowder blasts of the Mascleta.

The church combined this practice of the people for welcoming spring, with the festival of Saint Joseph. Over time and into the 20th century, the figurines became more elaborate and neighborhoods began to form groups for creating the fallas. Even from its earliest days, the nature of the fallas has been satirical and humorous, expressing criticism of local and international politics from the year past.

There are several major events that are traditionally part of the Fallas, which goes from March 15th – March 19th. Some take place starting at the end of February and beginning of March, and then continue during the weeks leading up to Fallas. The Mascletas is one of those traditions that begins even before the main days of the festival. Note that I said ‘begins’.

Delving Deeper into the Mascletas

The Mascleta takes place every day at 2pm from March 1st through the very last day of Fallas, March 19th. In the Plaza de Ayuntamiento, they fence off the very center of the plaza for the area where the pyrotechnic team shoots off the vast amount of fireworks, firecrackers and gunpowder blasts (I’m not joking – gunpowder blasts). Each day is a different pyrotechnic team that competes for winning the honor to do the last Mascleta on the 19th. Thousands of people fill the plaza and many of the streets leading to the center are closed.

In our past two years of experiencing the Fallas, we’ve seen that drum groups come from the various neighborhoods of Valencia, and some from different parts of the Valencia Region, to play in the streets during the hours leading up to 2pm. Many of the surrounding buildings have rooftop terraces where people gather to watch from overhead. The whole area is alive and buzzing with celebration. Groups of friends and families stand or even sit on the street beforehand, throwing back beers in their prime spot that is within blow-your-eardrums-range. Even the surrounding nearby blocks are full of people in the tavernas (bar + restaurant), standing at high tables eating tapas and drinking vinos. 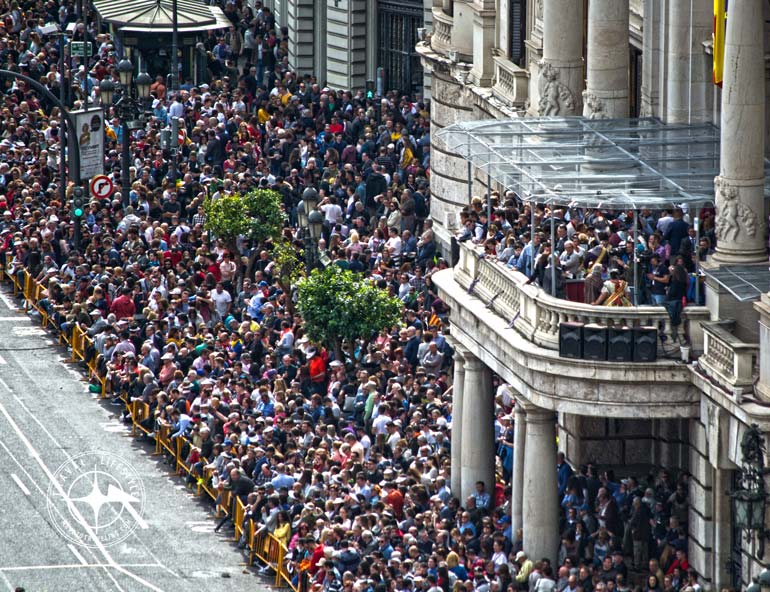 At the Ayuntamiento building itself, the city hall, there is a large balcony where the Fallera Mayor, kind of like the designated ‘queen’ of that year’s Fallas Festival, and her accompanying falleras and falleros (yep, that’s girl and boy versions). They’re elaborate dresses and suits are take-you-back-in-time incredible. The Fallera Mayor calls out at 2pm exactly, Senyor pirotècnic, pot començar la mascletà! (“Mr. Pyrotechnic, you may commence the Mascletà!”).

From there, it is several minutes of billowing smoke and brain-rattling noise that bounces off the buildings in impressive waves. In our video, we don’t have the noise at full volume or the entire full length of it, because you just need to be there in person to get the full experience.

Why and How You Should Experience the Mascletas

This is our third Fallas and Mascleta we have been to and we’ll never forget any of them. At our very first one, we were down in the middle of one of the closed streets and close to the city hall. It was so loud I could feel the sound tingling through me and I realized that even though no one could hear themselves, people’s mouths were open shouting along with the noise. When the booms came to an end, the people erupted into cheers and joyful shouting. It was fantastic.

Be prepared to get some ash and smoke on you if you get close. Depending on how close you want to get, you’ll want to also show up at least an hour early or more, especially during the main days of Fallas. If you want to see it from a rooftop like I got to, you can ask around at the hotels in the Plaza de Ayuntamiento. I was with the Tourism Department of Valencia, to whom I give a very big thank you, and we were at the rooftop terrace of the Casual Hoteles. It was a great spot for watching the event. 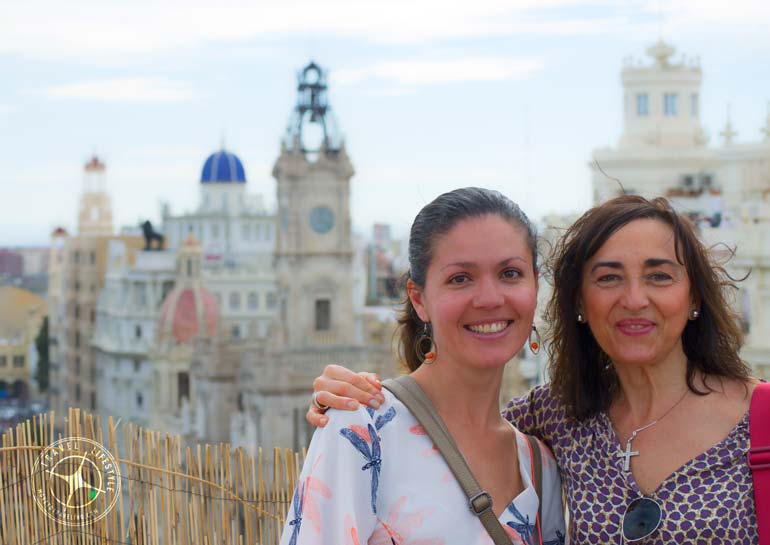 Above Image – A big thank you to our Valencian friend Angels for attending with me. You made it ‘un gran día’!

If you want to get to know the energy of the Valencian people and region, the Fallas tradition of the Mascleta is a must-see, along with all of the Fallas Festival of course. The vibe of excitement and celebration among all the people is contagious. The uniqueness of it and how it is carried out so safely, makes it a one-of-a-kind experience that you will never forget.

There's much more to Fallas in valencia

Enjoy our illustrated post, Fallas in Valencia, and Our ‘Falla’ About It.

Click to Read
This sidebar includes affiliate links that we may receive a commission from, at no extra cost to you.
Booking.com