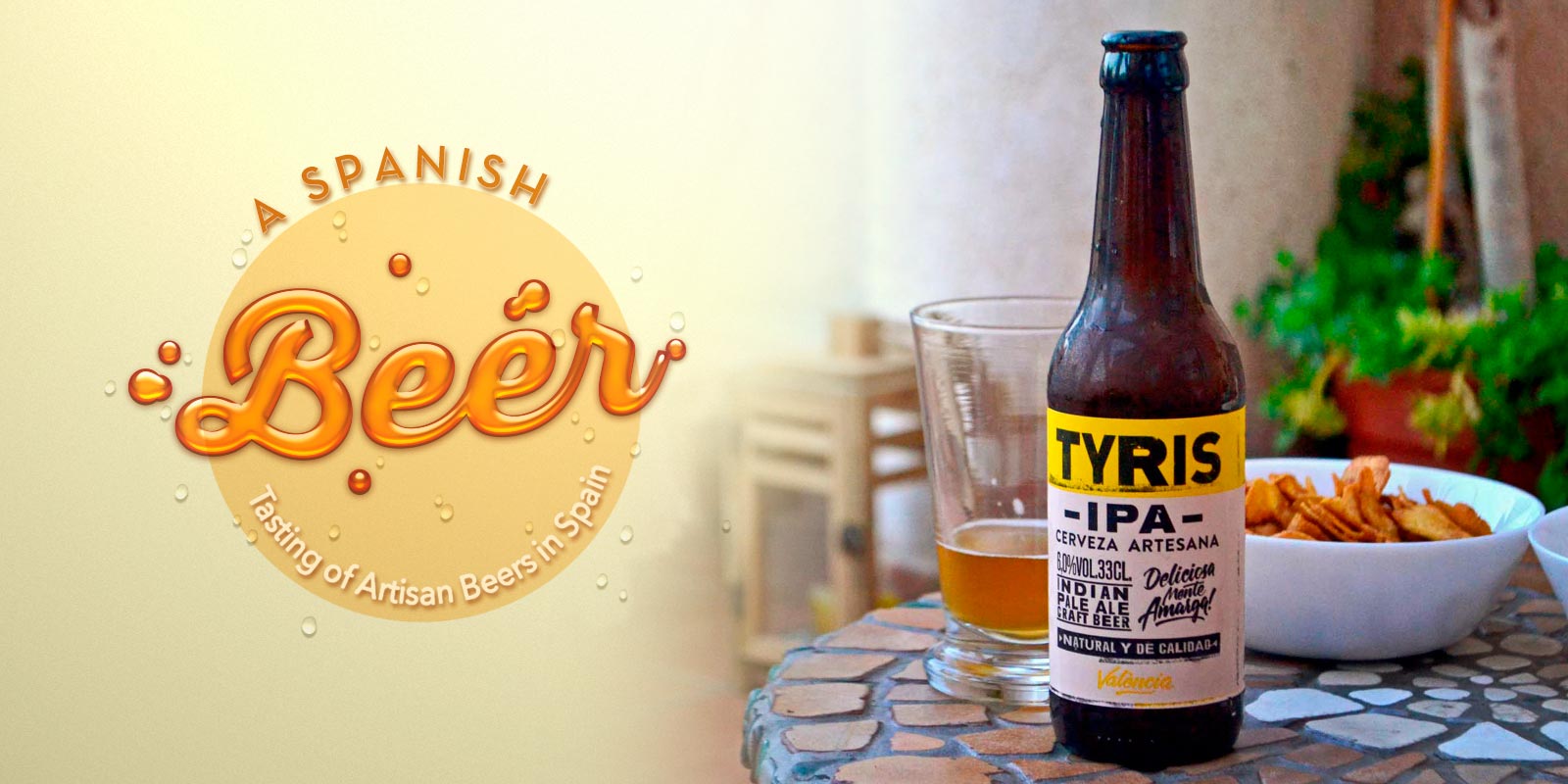 A Spanish Beer Tasting of Artisan Beers in Spain

← One of the Most Beautiful Villages in Portugal, the Medieval Village of Monsaraz Cudillero, An Enchanting Fishing Village on the Coast of Asturias, Spain →

Since moving to Spain a few years ago, we’ve seen Spanish beer experiencing a ‘Renaissance’ of sorts. And boy are we glad, because we sincerely love good beer. Just over five years ago, Spain was not the place where you would find craft artisan beer or local micro-breweries. Yet that has wonderfully been changing, and thankfully just in time for when we’re living here. We’re always on the lookout for locally crafted, artisan beers in Spain, and excited to discover that there are many others on the same quest. So recently, we did two Spanish beer tastings for friends and wanted to share the latest one with you. To whet your appetite, here’s what we sampled in one night, and trust us, the Spanish beer scene in Spain is only growing. 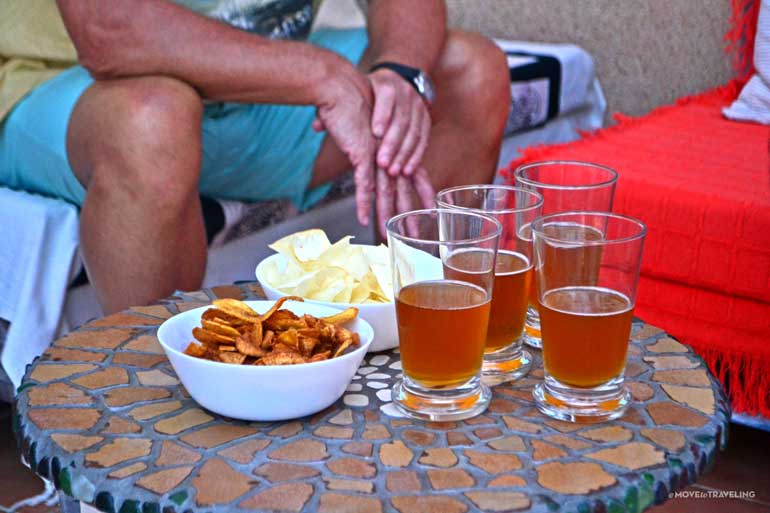 Let’s be real here. A big part of enjoying good drink, just like good food, is also the scene. Where you’re at, the environment and ambiance, all contribute to the tastes. Spain has no lack of picturesque locations and epic backdrops for this, wether it’s the medieval towers of Valencia’s Torres de Quart and Torres de Serranos, or a Mediterranean view of mountain meets sea. That last one is what we went with for this particular Spanish beer tasting.

So welcome to our Spanish beer tasting scene – our home. We set up our palett couches and hammock chairs on what we like to call our Montgo terrace, because it faces the mountain here in Denia called Montgo. From here we have a view of the entire mountain stretching out to meet the gorgeous Mediterranean Sea right where the Marina de Denia and the Marineta Cassiana beach are nearby.

A little more closer-up is our growing collection of plants spread out around the terrace. With a small palm here and friendly little succulents there, we’re in the midst of a garden in the sky. We’ve got Eric’s handmade table, made with beach stones and sea glass found in Las Rotas, topped with a snack duo of sweet and spicy plantain chips and savory yuca chips (for clearing the palate of course).

Now we were ready to start tasting. In the order that we sampled them, here are the Spanish beers we tasted. 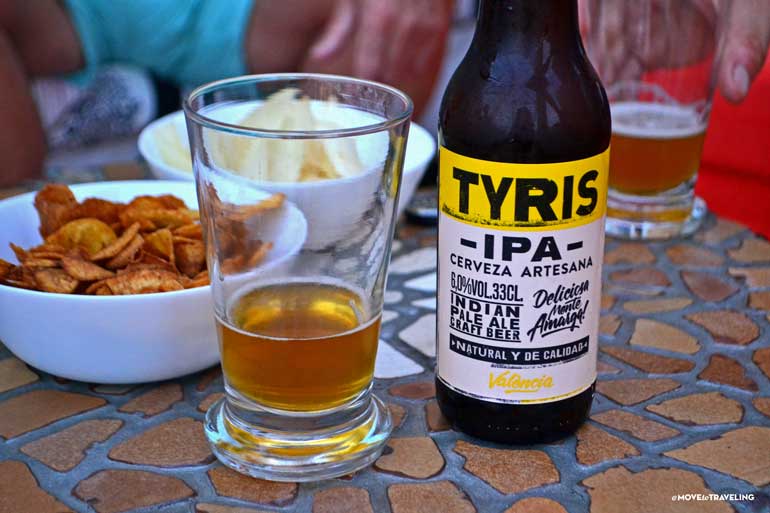 This IPA is made by Tyris out of Valencia and is one of the first local breweries of craft beer that we discovered when we first moved to Spain. Along with its predominantly hoppy taste, it has a lovely citrus touch and herbal finish that’s very refreshing.

Amalia is not as keen on hoppy beers, but enjoyed this one because of the citrus tones. Keep in mind that it’s also a powerful beer, with a stronger ABV of 6.2%. It was a great beer to start with and also went well with the crunchy, salty snack. Our friends Anita and Alan liked it as well.

When it comes to hoppy beers, we’d put Tyris IPA among the top of our list. 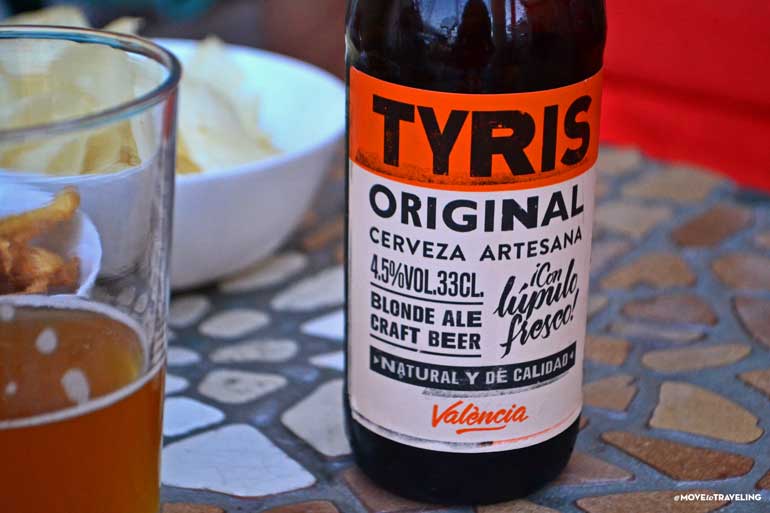 Sticking with the Tyris trend, we moved on to Tyris Original, which is a blonde ale. As its name suggest, it was also the first beer made of their line of beers. It’s a well-balanced beer that’s good for any time of the day and with any food. Right away, all of us were able to taste the maltiness and a slight hint of grains and even fruit. It was liked by everyone.

Most blonde ales we’ve enjoyed have very little or no hops taste and aroma. Yet in this one, the German hops make an appearance towards the end and with a subtle finish. We all determined that it’s overall very refreshing. It’s also quite light, at only 4.5% ABV. This one also went well with our slightly sweet and spicy snack.

Where to Find Tyris Beers

You can find Tyris Craft & Creative Beers in many local artisan bodegas throughout Spain and even some major grocery stores, like Consum. But our favorite place to get it is definitely at the tasting room / restaurant, Tyris on Tap, where they serve all of their beers. Amalia also loves their Paquita Brown (Brown Ale) and Eric loves their VIPA (Session Indian Pale Ale). They also have great tapas and food, so go thirsty and hungry, and with time to hang out and relax.

They’re ideally located in the heart of Valencia’s historic district and Barrio del Carmen, just around a corner from the Mercado Central (Central Market) and the Longa de la Seda (Silk Exchange Building). Interested in how they craft their beer? You can visit their factory as well, which is just on the outskirts of the city of Valencia.

The Spanish word for beer hops is lúpulos. 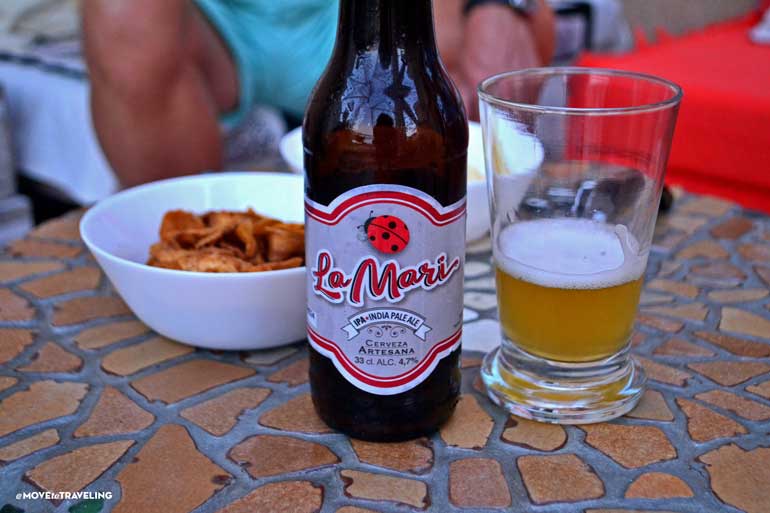 The cerveza La Mari is made by Marieta Artesana, which is in Paterna, Spain. Right away we noticed the grapefruit aroma, which is delicious. It’s complimented by a nice maltiness and has smaller bubbles so its carbonation feels more fizzy.

We all thought it to be a deliciously light and refreshing beer. At only 4.7% ABV, it’s an easy beer to drink.

The Consum grocery store is where we find it, but aside from that, we have not been able to find any other information on the brewer. 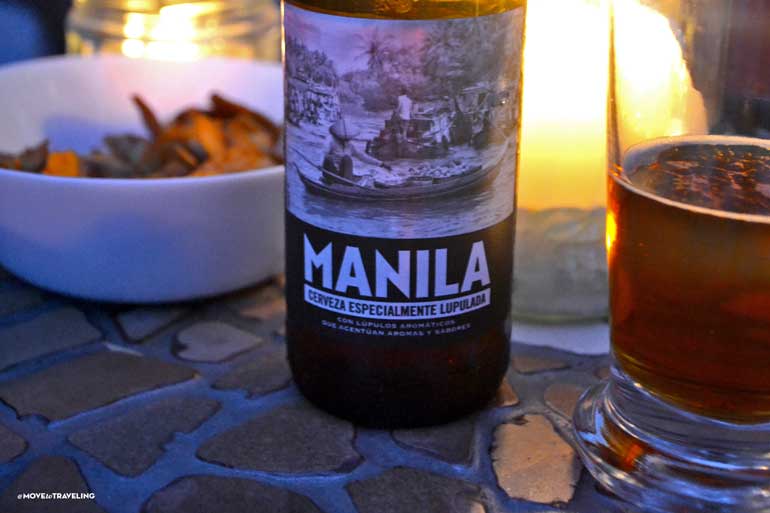 This beer is quite exceptional. It’s made by San Miguel, which we’ve known to be a typical beer throughout Spain. But honestly, we never really cared for it. That is, until we tasted their new beer, Manila.

Manila is a fantastic blend of malts and hops, with a smooth finish. It’s uniqueness comes from the taste of caramelized malts that contrasts nicely with the bitterness of the hops. It also has a great amber color to it and is low carbonation. For ABV, it rates at 5.8%, so a tad bit stronger.

We keep bringing this beer home, and get it from the Consum grocery store. Now that we’ve found one of their beers that we love, we’ve learned that San Miguel is a huge brewing company. They’re owned by the corporation group Mahou San Miguel, which also owns Mahou and other beer brands. Their presence is international, but they’re based out of Madrid.

Mahou is known as the beer of Madrid.

The Carmen White IPA is light with citrus flavors, some good hops to it, and a slight hint of cardamon. But overall it tasted a bit ‘thin’ and was not a big hit with any of us. The ABV is 4.7% and its color is a very light yellow.

It’s in the style of a wheat ale and made by Cerveses La Gardénia, which is a micro-brewery located in Tarragona, Spain. We have had some of their other beers before in their Carmen line, and thought them better than this one. What is confusing though is that when we go to look up more information, we only find a line of beers called Rosita. What happened to Carmen?

We bought this beer in the Lidl supermarket.

Remember how we said that Mahou is the beer of Madrid? Well, don’t tell any Madrileños (Spaniards from Madrid), but this is another one that we never liked much. It’s especially common on tap throughout Madrid and other parts of Spain. Then we discovered their Maestra. It’s their craft beer that is toasted and has a delicious maltiness, while also being double hops (or as they call it in Spanish, ‘doble lúpulo’).

Along with its great taste, Mahou Maestra has a rich, amber-gold color that we love. We think it’s a little smoother on the bubbles, which are slightly smaller. The style is considered to be an Imperial Pils / Strong Pale Lager. And yes, it is stronger than your average Spanish beer, with 7.5% ABV.

Great news is that Mahou Maestra is served on tap in many places that serve Mahou, especially in Madrid. For bringing it home, we buy it in the can or six-pack at a Consum grocery store, and it’s also available in glass bottles. 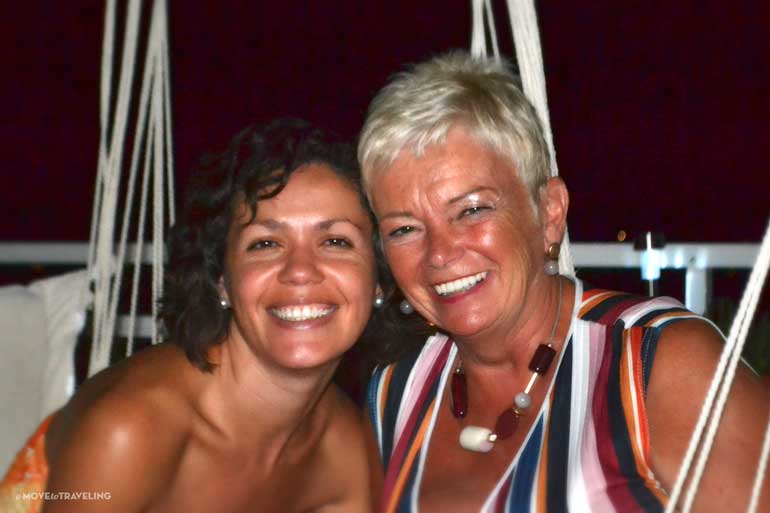 When in Denia, you can enjoy Mahou Maestra deliciously on tap at Casa Benjamin. It’s one of our favorite places in town for tapas, beer and vermút casero (homemade vermouth). 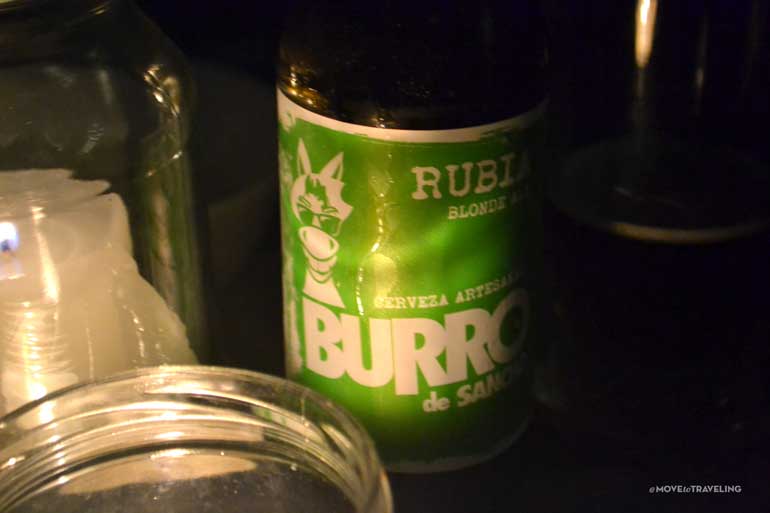 This artesanal beer is made by a brewery called La Sagra. It’s a blonde ale that is light and refreshing to drink. It can be very aromatic with some notes of fruit and quite a bitter taste at the end.

Overall, none of us cared for it much and thought it a bit boring. The taste was more astringent than we like, yet it seemed weak. The ABV is 5%.

The brewery is located in Numancia de la Sagra, which is just in between Madrid and Toledo. Although we didn’t like this beer, we would still give some of their other beers a try, especially their autumn seasonal Pumpkin Ale, made with calabaza y canela (pumpkin and cinnamon).

We bought the Burro de Sancho beer at the Lidl supermarket.

So which Spanish beer was our favorite? 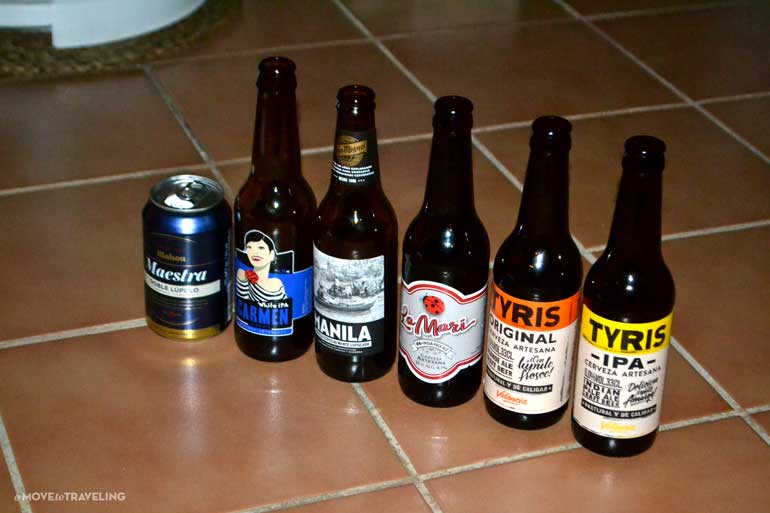 Our most favorite was the Manila by San Miguel.

Then in second place came the Mahou Maestra and our third favorite was the La Mari.

While we especially love the Tyris beers, we were drawn more to the uniqueness and flavor profiles of the top three that we like. The exciting thing is that there are so many fantastic craft beers in Spain now and being brewed by Spanish breweries. This tasting was just a handful and our intent was to try ones we had not had before, along with some that we already knew and liked.

What is interesting is that our two favorite beers in this tasting are artesanal styles but made by main-stream commercial beer-brewers here in Spain, rather than micro-breweries. It goes to show even the beer brands who have been here the longest are listening and responding to the demand for craft, artesanal beer.

For some time Europe has had an influence on Spanish beer. Yet we recognize that the recent craft beer culture in Spain has come about with influence especially from the USA. Having lived in Denver, Colorado before, a mecca for craft beer and micro-breweries, we can definitely see this western trend being fully embraced for Spanish beer. As if Spain couldn’t get any better!

What do you know about Spain and craft beer? Got any Spanish craft beers to recommend? We’d love to hear from you in the comments below. ¡Salud! 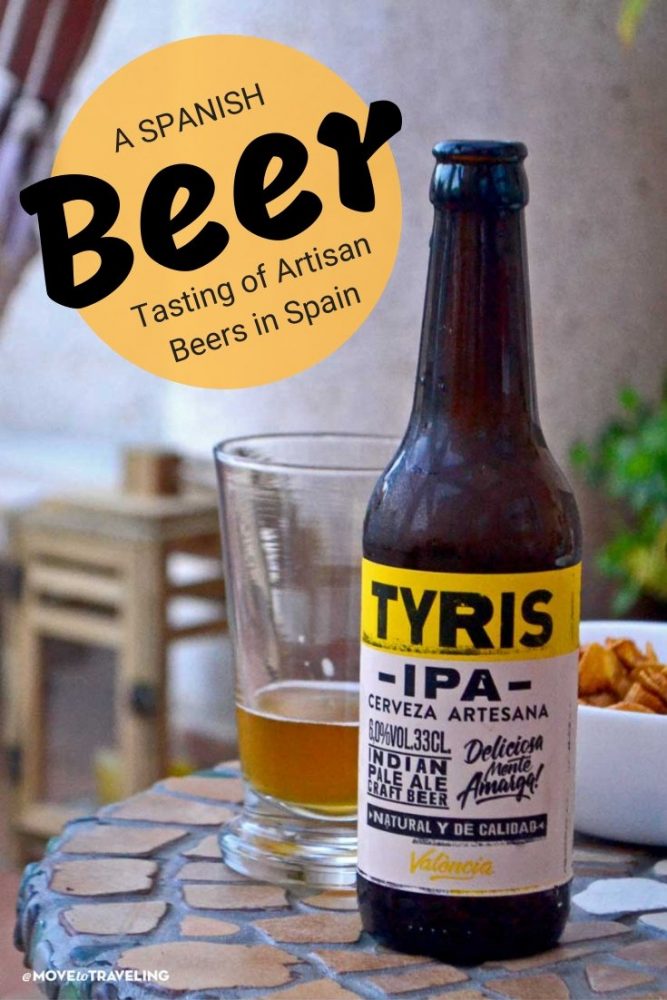