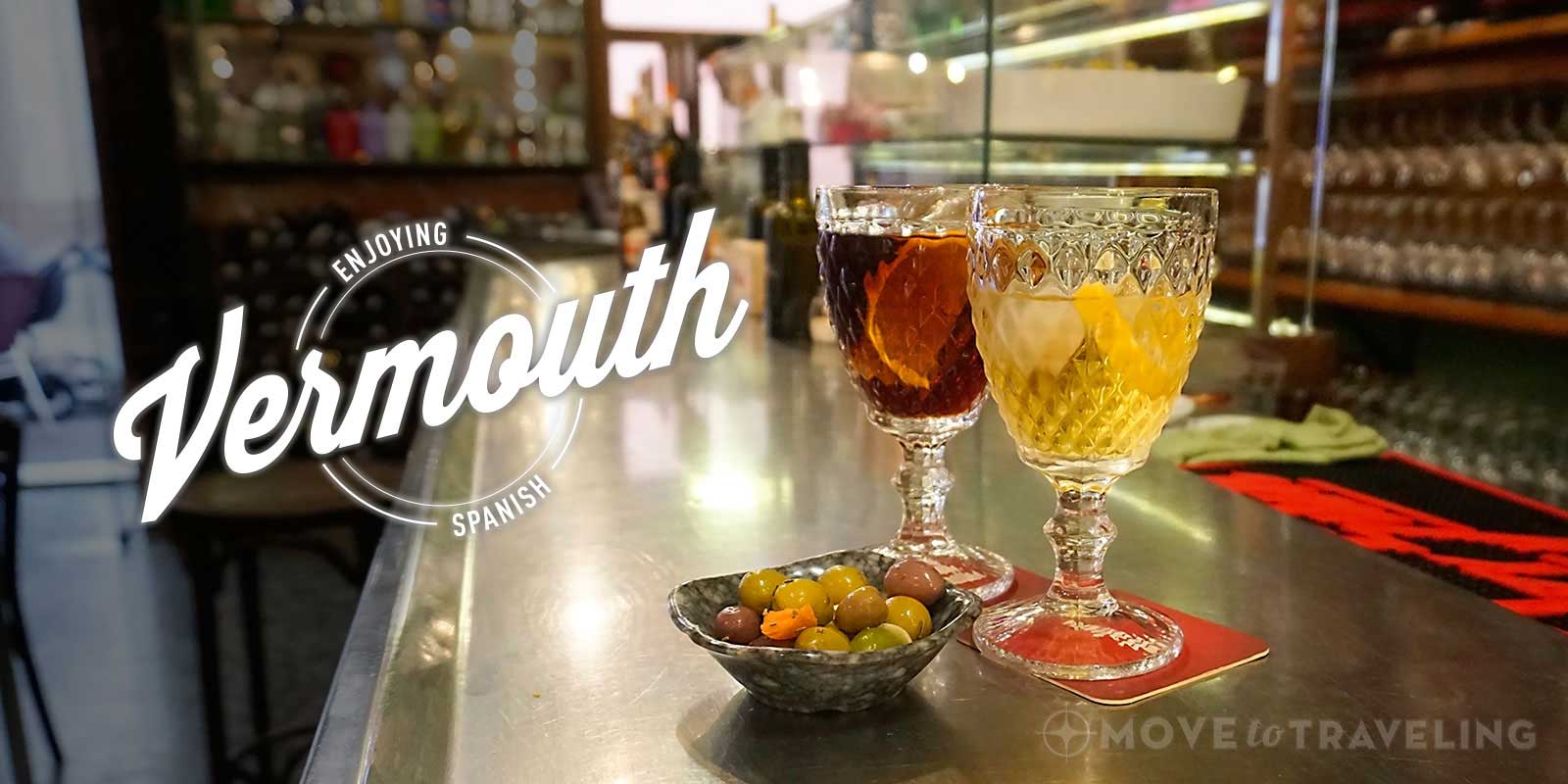 Ok. I’ve poured myself a lovely glass of Spanish vermouth, taken my first delicious sip, and now I am officially in the spirit of things (pun intended) to introduce you to Spain’s favorite aperitif. Spanish Vermouth is one of our favorite drinks in Spain. Not only do we love its distinct combination of flavors, but we love the history and culture that go with this traditional Spanish drink. While its popularity has returned and continues to grow, it is also one of the more unique drinks that many newcomers to Spain have not experienced. And if you’re new to Spain, we assume you love trying new things. Spanish vermouth is one of those glorious treasures of Spanish gastronomy and lifestyle that for any foodie and Spain-lover is a must-have experience that will win you over. So go beyond the typical sangria and vino, and let’s venture into the world of Spanish vermouth.

Take this guide with you!

Get access to our guide and many others via the GPSmyCity App, for on and offline access and GPS capabilities.

What is Spanish vermouth? 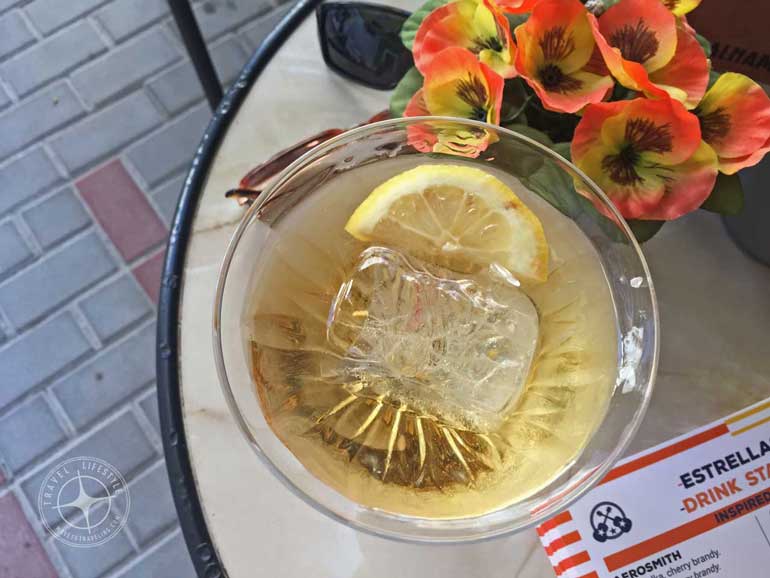 When people hear the word vermouth, they usually think of Martini or of the vermouth used as a mixer in cocktails. This is not the case with Spanish vermouth and it is not Martini. Now, you could say it is a cousin of Martini, which is an Italian-made vermouth. But the dedicated vermouth drinker in Spain (us included), consider Martini to be more commercialized and not as artisan or homemade.

Vermouth is essentially fortified wine that is blended with aromatic herbs. It starts out as white, but then gains its more commonly known red color from the infusion of caramel, spices and herbs, one of the essential ones being wormwood. It’s actually quite strong, at 15% alcohol content, and thus why it’s good to have with the traditional salty tapa or snack. Thanks to the herbs, it prepares the appetite and helps with digestion, so it’s great to drink before a big meal.

Like we said before, it’s not usually a mixer. Spanish vermouth is served neat, chilled and over ice. Then it’s garnished with a wedge of orange or lemon and an olive. Some Spaniards like to add a splash of sifón, or club soda, which opens up the aromatic flavors and enhances how refreshing the drink is, especially on a summer’s day.

Since the Spanish have such a great culture around food, it’s no surprise that Spanish vermouth is experiencing quite the resurgence. Today, it’s considered by many as Spain’s favorite aperitif. And our’s too. 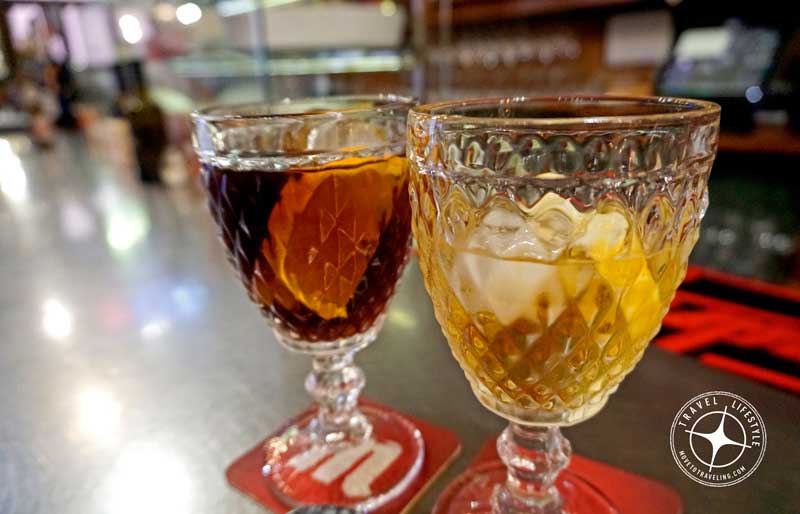 Spanish vermouth tends to be a little sweeter than the vermouths from neighboring France and Italy. Like wine, the taste profiles vary across a range between sweet and dry. There is also red vermouth, vermút rojo, and white vermouth, vermút blanco. And like any libation, there are mainstream and premium lines of Spanish vermouth, like vermút reserva. Think of them as ‘top-shelf’.

We tend to not like sweet drinks, and yet love Spanish vermouth. So remember that there are plenty to try until you find one that suits your taste.

Overall, the flavor profile of the traditional Spanish vermouth consists of sweet and bitter tones or a bitter finish, along with the botanical flavors of the herbs, bringing out notes of cinnamon, cardamom, licorice and dark fruits.

The History of Spanish Vermouth 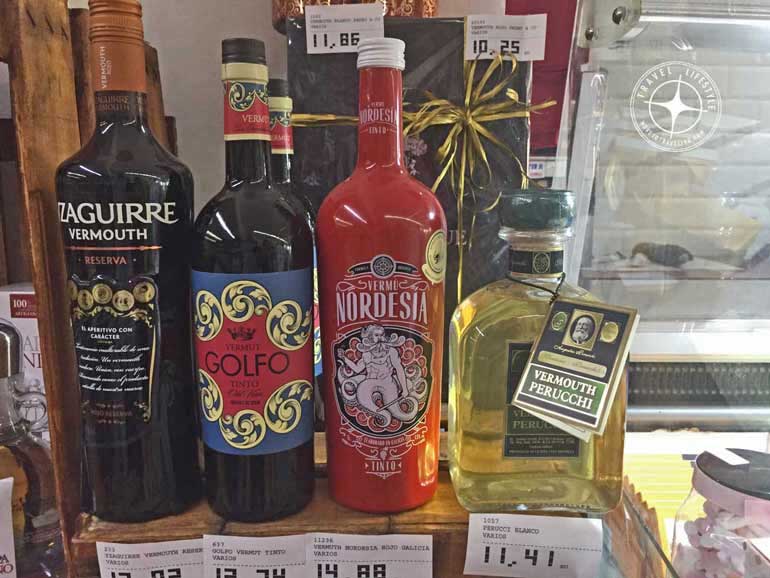 The origins of Spanish vermouth go back to the 18th century and traditionally come from Reus, a town in the region of Catalunya. This is where many of the oldest Spanish vermouth makers come from. These oldest brands still with us today are Yzaguirre and Miró.

These classic vermouths tend to be sweeter, so they’re great for pairing with a salty snack like conservas and encuritdos (conserved anchovies or little fish, and other cured and pickled snacks). Many places will serve vermouth with olives or potato chips as well. 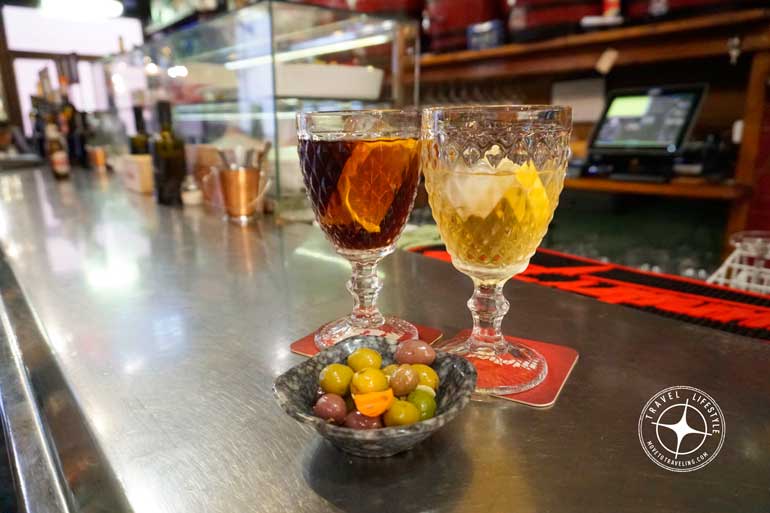 During the Franco-era, Spanish vermouth practically went incognito. Especially for a while in the years after the Franco-era, the culture of getting a vermouth was pushed aside for the introduction of the also popular Gin and Tonic.

Yet thankfully, Spanish vermouth has made a comeback and looks like it will remain in the spotlight. There are new makers from all over Spain, each creating vermouth with their own distinct influence from their region.

Here are some of our favorite brands that we enjoy when out and sometimes like to savor at home.

Some of Our Favorites Among Spanish Vermouth Brands

Today, drinking Spanish vermouth is quite the fashion and its culture has been embraced by the younger generations while still enjoyed by the older generations who have carried it on. We recently have seen new creative ventures, for example a rosé vermouth, or vermút rosetta by Carmeleta. We’ll be trying that soon and will update this post about what we think of it, so stay tuned.

So here’s the update on the Carmeleta. We love it! It has quite unique flavors, yet all the wonderful elements of vermouth that we love. From cardamom to cinnamon and other exotic spices, it makes for a tasty vermouth to have, especially as they recommend, with a strawberry and cinnamon shavings. We added frozen raspberries as well, and ice. 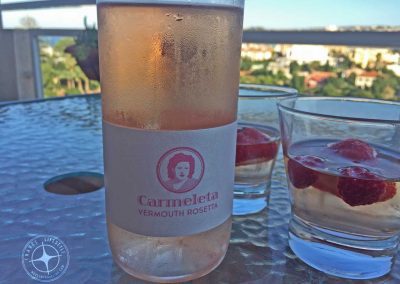 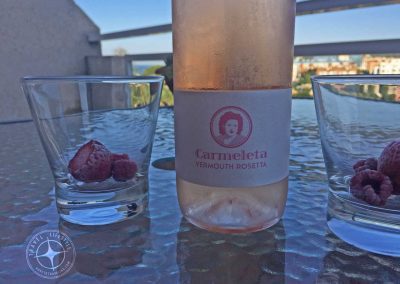 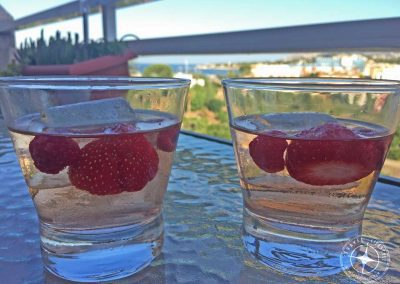 And while Spanish vermouth is usually not a mixer, there are those who have crafted their own mixed vermouth creations and do a great job at it. For example, Casa Camacho in Madrid have a vermouth drink they call Yayo, and it’s not for the faint drinker at heart. It’s their red vermouth on tap mixed with a lot of gin and a splash of casera, a slightly sweet and citrus-flavored club soda. Another one we need to try and will post about here.

The Culture of Spanish Vermouth 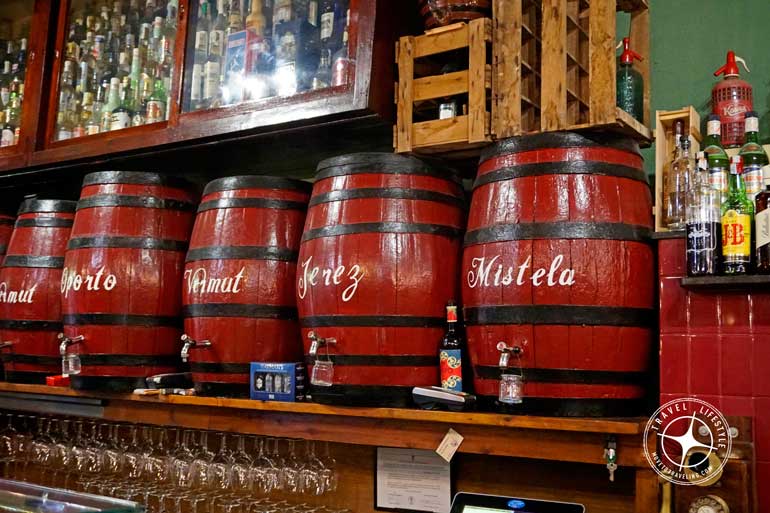 Above Image – The Restaurante Juan Miguel on the Loreto Street in Denia, Spain.

In its early days, the places where Spanish vermouth was commonly served were known as bodegas, small taverns or bars. Some would make the vermouth there themselves and serve it straight from the barrel. There’s also places adopting the somewhat old term vermutería, which today is being used more for modern, hip bars designed for tapas and especially the varieties of Spanish vermouth.

The Spaniards have the term la hora de vermút or vamos a tomar un vermút, which both mean that we’re going to go have a vermouth. We like to think of this as a kind of happy hour in many ways. La hora de vermút, or going for a vermouth, is inexpensive, usually coming with a free tapa or at least some savory olives or potato chips to munch on.

Spanish vermouth used to be considered more of an ‘old man’s’ drink, and it is still not surprising to see old men sipping on a vermút rojo well before noon. The only difference is that today, you’ll see me and Eric right there sipping Spanish vermouth with them.

It was also typical to go for a vermút on Sundays, before and/or after Sunday mass. Most Spaniards today don’t attend church or consider themselves to be religious, but they certainly have taken up this tradition with gusto and in Spain it’s one of the most socially accepted alcoholic drinks to have earlier in the day. Spanish vermouth has especially become popular among the hipsters and Spanish expats (guess that would be us), who while enjoying the new modern vermuterías popping up, also seek out and treasure the vintage bodegas and their local, classic charm.

How to Recognize and Enjoy Spanish Vermouth 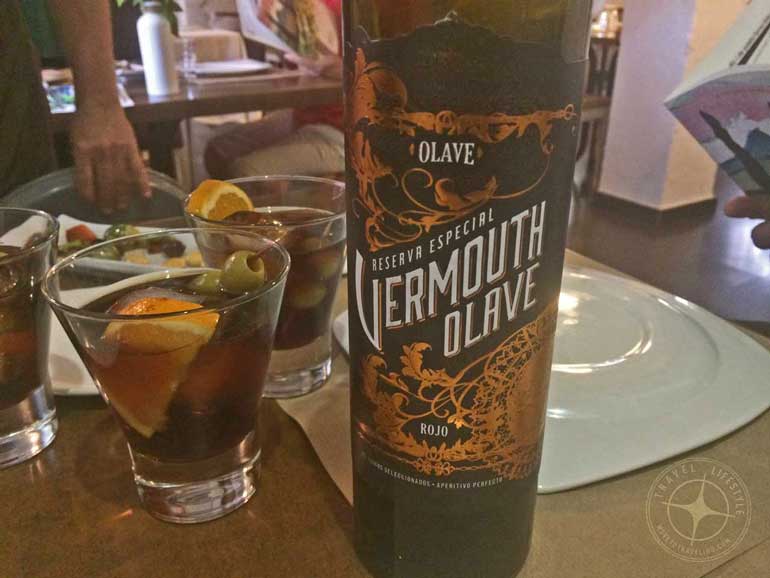 There are a few key things to keep in mind so that you enjoy true, great Spanish vermouth. We know firsthand, there are still places in Spain that only serve Martini, so beware.

First thing is to make sure they serve Spanish vermouth. There’s three kinds that can be an option.

Ask for any of the following:

Usually, places that serve these will have it on a sign out front, so check there as well. In the cities, especially Madrid and Barcelona, it’s more common to find places that have vermút de grifo and sometimes it’s poured from the barrel itself.

Then, when you go to order Spanish vermouth, you can specify the following: 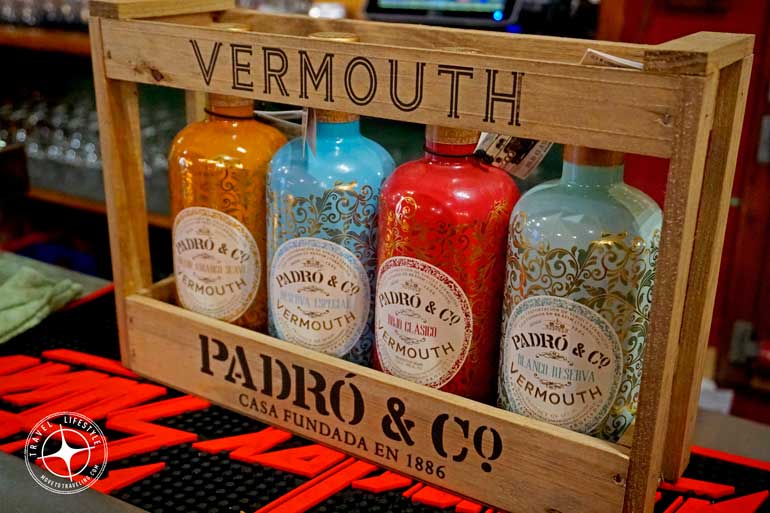 When we first started living in Spain, many places only served vermút rojo, and now we’ve been noticing that more and more serve both red and white variations. If it’s red, it should be served with an orange slice, and if it’s white it gets a lemon slice. And both should come with an olive.

Speaking of the olive garnish… Our insider’s tip to you is this: Some places will use an anchovy-stuffed olive to garnish their vermouth, rather than a plain, regular olive. We’re not big fans of anchovies but especially not in olives and soaked with vermouth. Some people love it but in case you feel like we do about those little fishies in your vermouth, now you know, at least before you pop that vermouth soaked olive in your mouth.

Where to Enjoy Spanish Vermouth 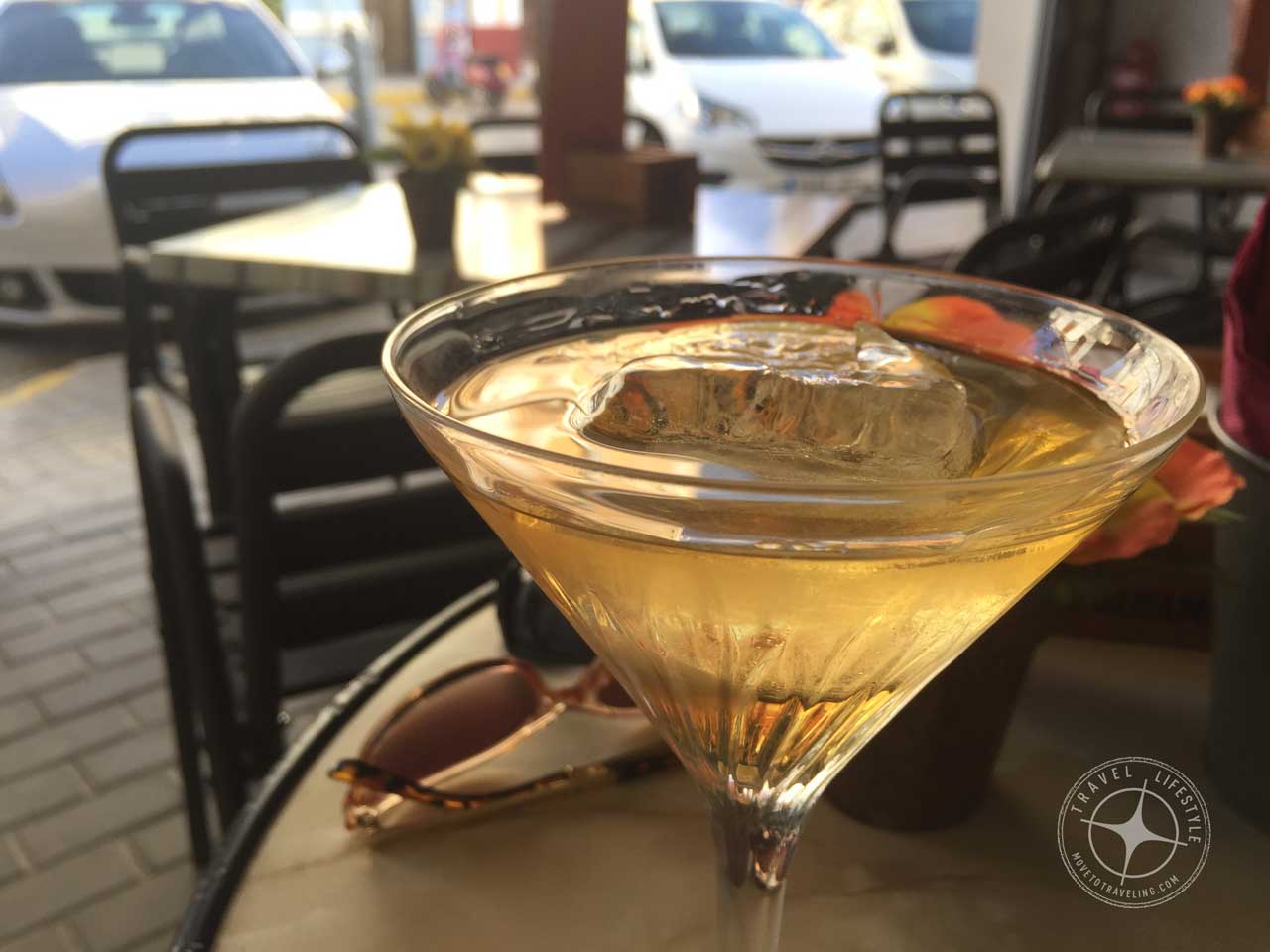 Great! Now that you’re all introduced to Spanish vermouth, it’s time to get out in Spain and enjoy la hora de vermút. Here are our favorite places that we highly recommend, as well as some resources for tours and other sites that will point you in the right direction.

Read More: Ditch the Bar Crawl – Denia is One of Spain’s Best Tapas Routes for Foodies

Read More: 5 Tips for How Best to Visit Seville in August

What do you know about Spanish vermouth? What places in Spain or Spanish vermouth brands would you recommend? We’d love to hear from you, so please comment below. Thank you and salud!

And yes, I finished my vermút, and only half way into writing this article!

Take this guide with you!

Get access to our guide and many others via the GPSmyCity App, for on and offline access and GPS capabilities.

Download Now
This sidebar includes affiliate links that we may receive a commission from, at no extra cost to you.
Booking.com