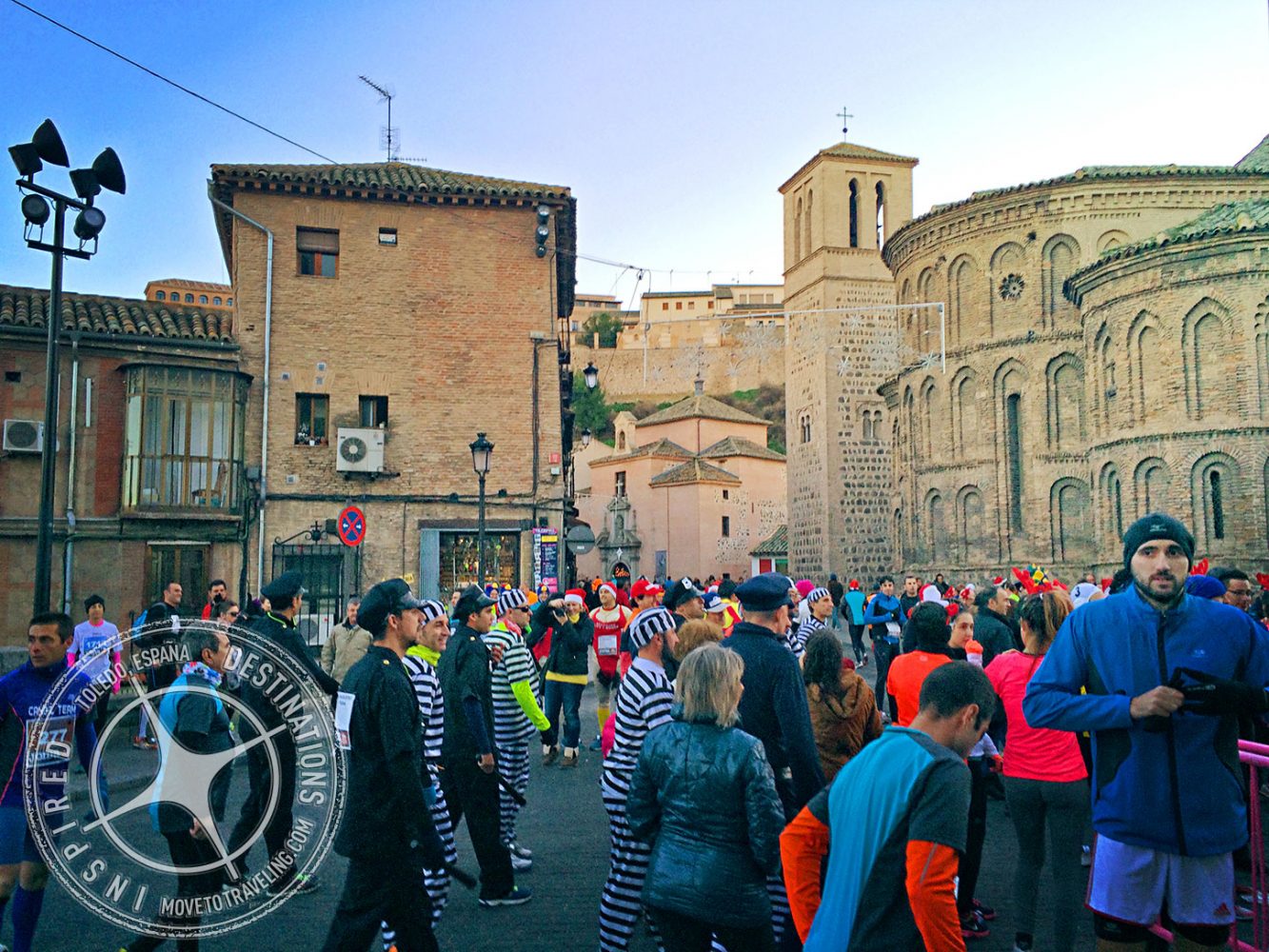 ← Visiting Avila, Where Medieval Spain Lives On The 12 Mantras for Sanity (and Joy) when Hosting Family →

There are more Spain races than people realize and one of the funnest and most popular is the annual San Silvestre Toledana. It takes place every New Year’s Eve and a while back we took part for bringing in the New Year. And no, there’s no being chased by bulls. If you’re going to be in Spain for New Year’s and want to do something unique and commemorative, run the San Silvestre Toledana in Toledo. It will be an experience to full of memories to hold dear and stories to share for years to come, just like it has for us. 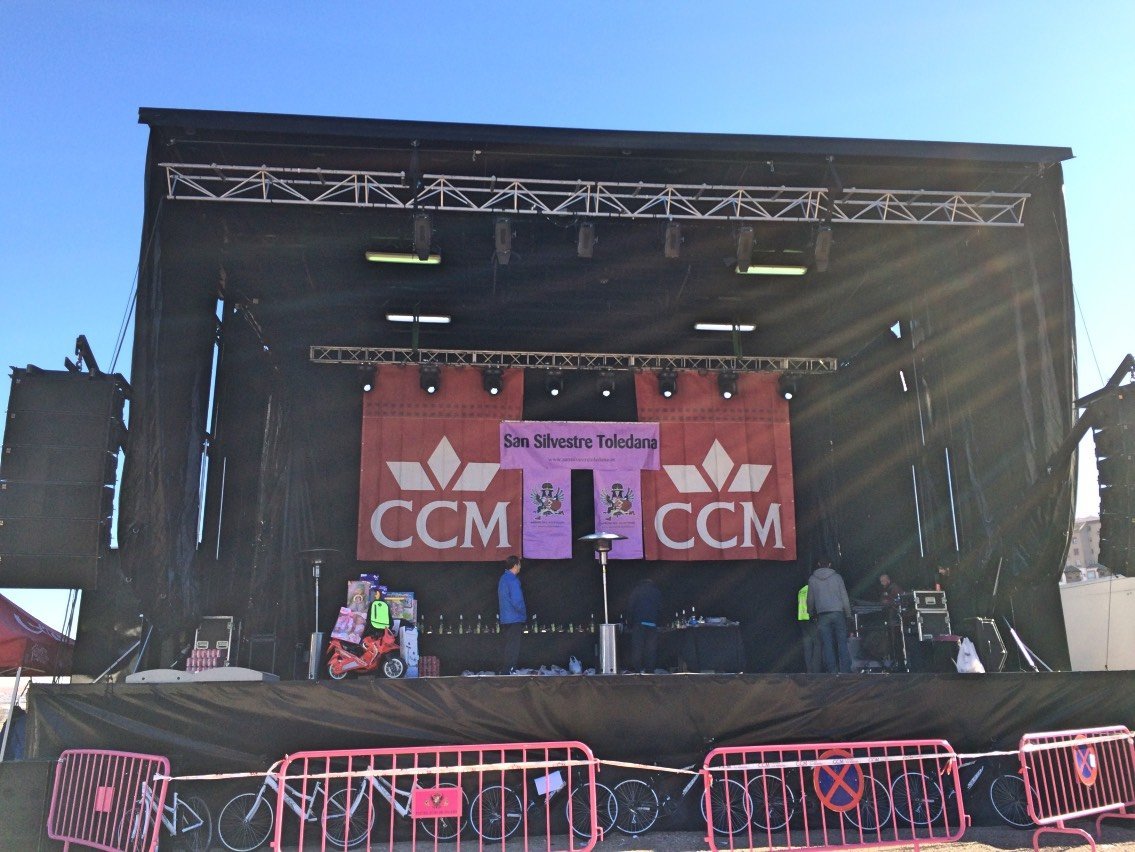 Toledo is not the only place that has this race. There are actually over 200 San Silvestre races throughout Spain. The San Silvestre Vallecana is the biggest of them all, taking place in Madrid with up to 40,000 participants.

These races have been taking place since 1925 when the first one took place in São Paulo. That’s right – this race has international popularity and presence now. Back then, the race started later so that it was run from New Year’s Eve into New Year’s Day. It was originally inspired by a race in Paris where they ran with torches the night of New Year’s Eve to celebrate the New Year. The races are today still held each year on December 31st. The San Silvestre Toledana in Toledo starts its earliest waves, the children’s race, at 5pm (17:00). The adults then begin in several waves starting at 6pm (18:00). 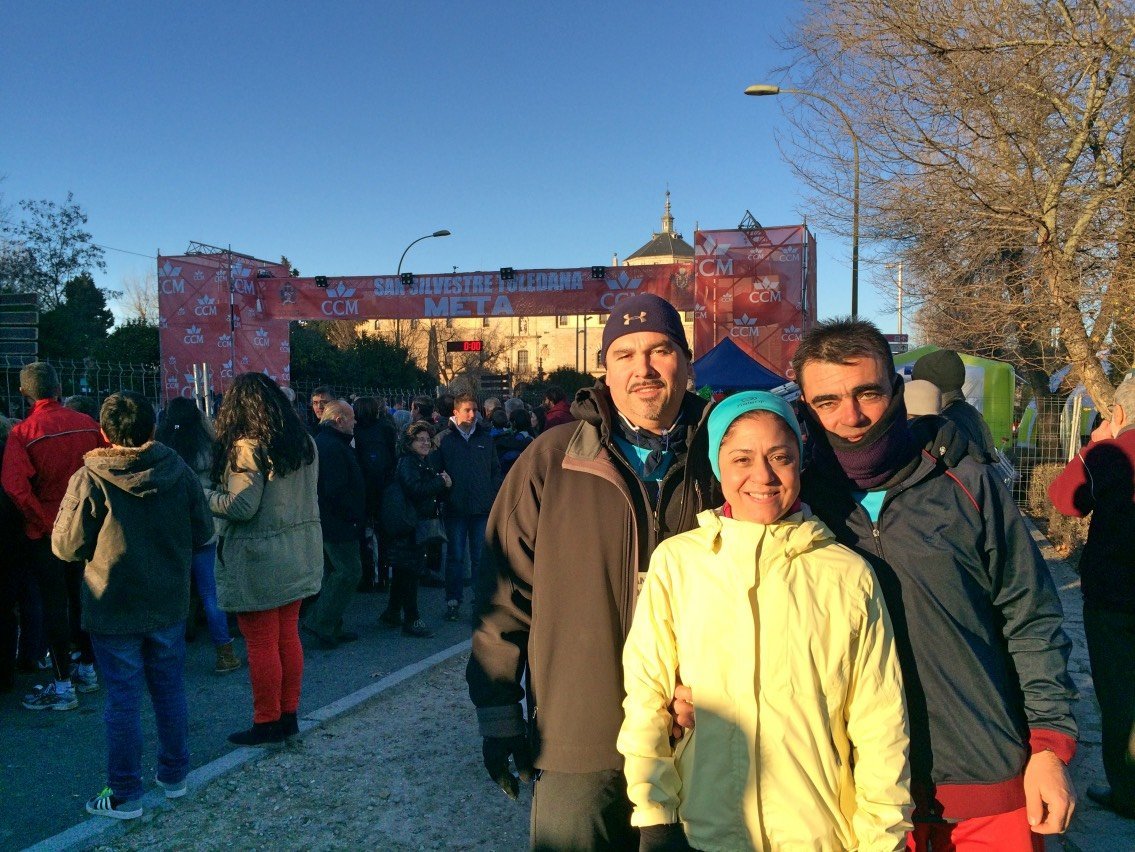 Amalia ended up having a cold so backed out of the race. Instead, she strolled around the race start area and took pictures while waiting. Even bundled up with layers, scarf and gloves, it was pretty cold. Make sure to dress for the cold weather, since Toledo can get pretty cold at this time of year. 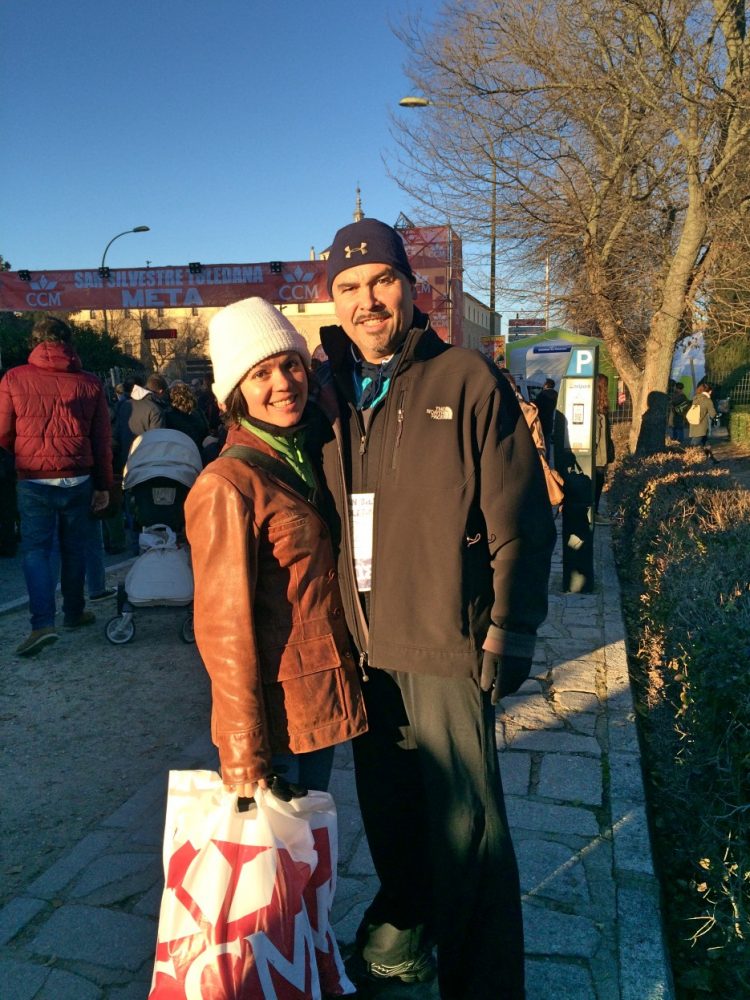 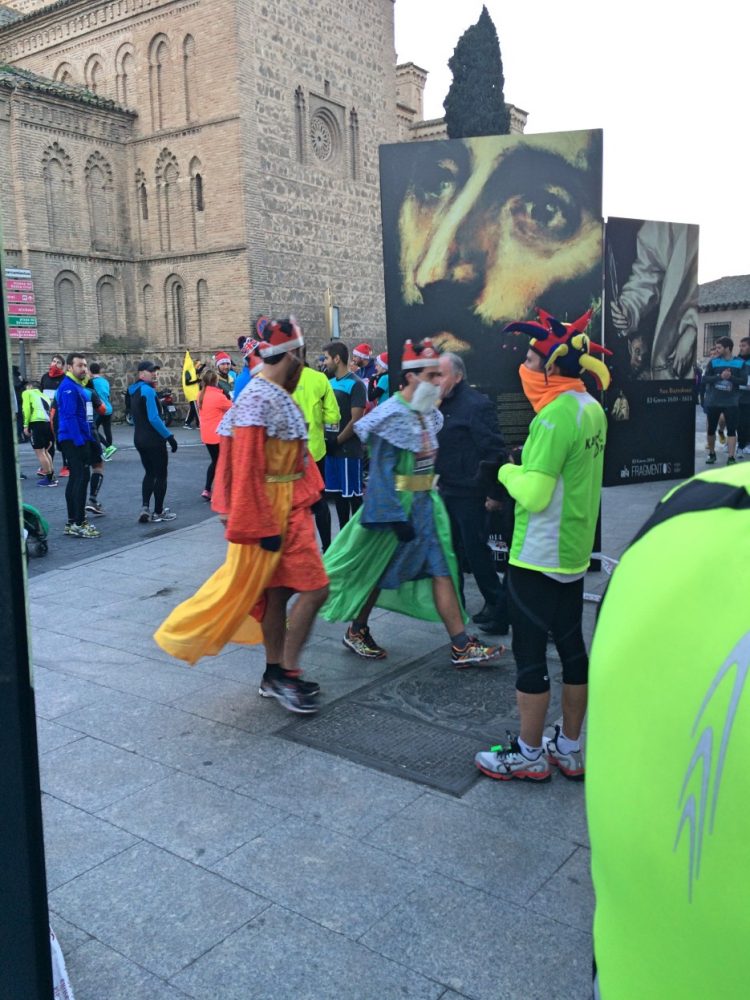 While the race is not super long, it is about a 5k run by US standards. Better yet, Toledo has some inclines and the race winds its way through the historic town and then around along a part of the wall. Towards the end it is an especially long uphill ascent. So…yeah, you want to make sure to have done some running before and to be in shape and physically ready for this race. 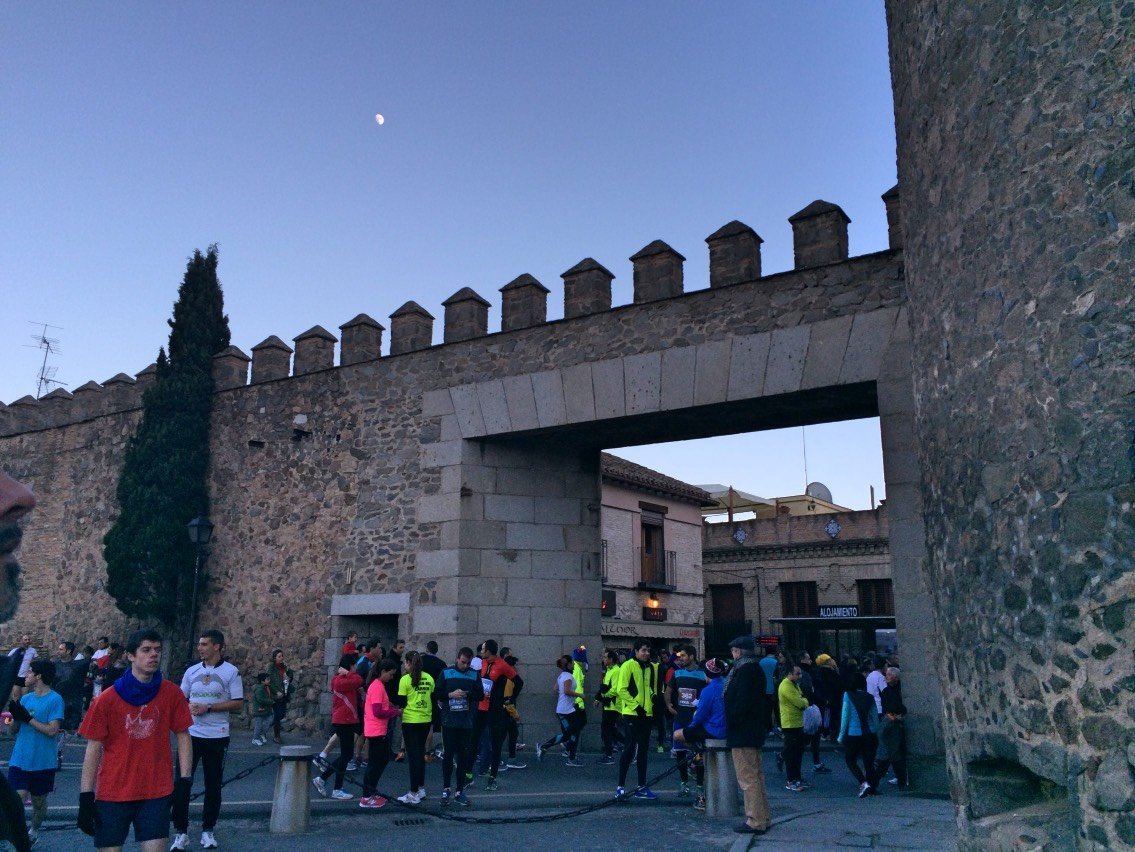 We have memories of the San Silvestre Toledana that bring smiles to our faces and laughter to our hearts. One of the funniest parts was when Amalia’s mom was standing near Eric at the start up…she’s really short and petite and the immense crowd of people packed tightly around them was what seemed a foot taller than her. So when AC/DC started playing on the loud speakers and everyone started jumping up and down, she told Eric ‘Stay close to me and make sure no one tramples me!‘. Yet once the shot was fired and everyone starting running, she looked back at Eric 5 minutes into it and said ‘I’m fine now. See you later…‘ and took off ahead! That’s Amalia’s mom. And yep, she finished the race about 15 minutes earlier than Eric.

It was a blast participating in the San Silvestre Toledana. With the town decorated for the holidays and the romantic, Medieval setting of Toledo’s iconic beauty, it created an amazing energy among the people gathered for the race. Everyone was celebratory and energized by music playing and coming together in such a great setting. A lot of people were part of groups formed who run the race every year. Many of them were dressed up and had a theme, which was really hilarious.

Eric’s fondest memory was the last leg of the race, pushing up the last stretch and incline to the finish line. The town’s people and spectators were lined up along the sides, cheering the runners on. But the best ones were the ‘cheerleaders’ who started coming out of the bars to hold out beers to runners. Some were even giving lit cigarettes to some runners and they were actually smoking them while finishing the run! It still really cracks up Eric to recall that to friends. *We do not like or endorse smoking, just so you know.

Registering for the race is done ahead of time. We were able to register online through the website, even while we were in the US.

Have you ran a race in Spain? What other occasion or holiday was it tied in with? We’d love to hear about your experience! 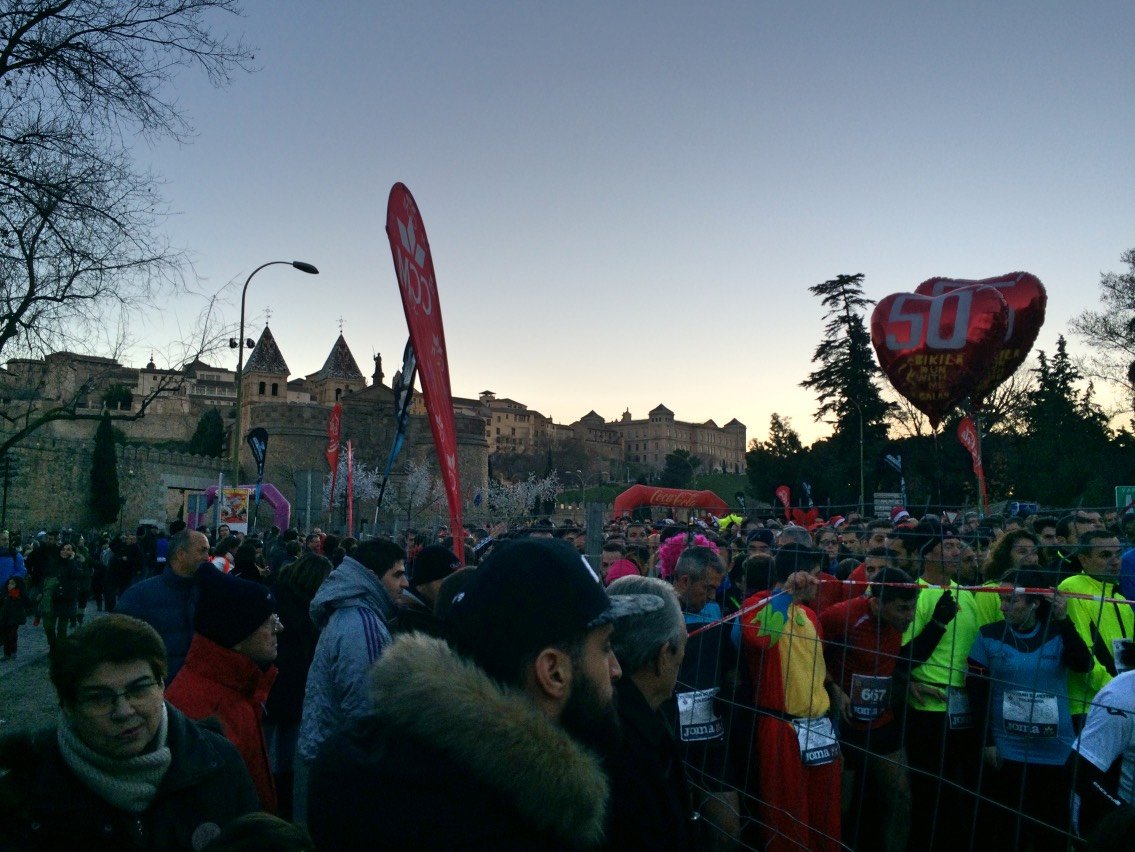